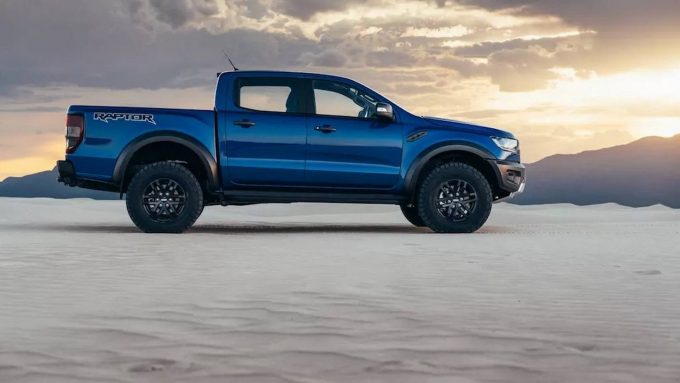 This places it above the Toyota HiLux Rugged X and HSV Colorado SportsCat, but the upcoming Mercedes-Benz X350d could be in the same ballpark price-wise.

Powered by a 2.0-litre twin-turbo four-cylinder diesel, the Raptor produces 157kW and 500Nm, which is an increase of 10kW and 30Nm above the current 3.2-litre five-cylinder turbo-diesel unit. Connected to a 10-speed automatic, the Raptor promises a combination of crawling power and fuel efficiency. It has a 332mm brake disc package at the front and rear, with BF Goodrich off-road tyres.
The U.S. Spec Raptor has yet to be revealed, but is expected to be powered instead by a 2.7-litre twin-turbo petrol engine. It will also form the basis for the 2020 Ford Bronco- a rival to the Jeep Wrangler.

Additional ground clearance, bash plates and Fox suspension means it can attack sand dunes and rocks with far more disdain than the regular Ranger. Inside, it will benefit from sports seats, blue leather stitching and Raptor graphics for the infotainment system.

Ranger has maintained a strong sales lead so far in the Australian new car market, regularly jostling for number 1 position with the Toyota HiLux. The addition of a new hero model, inspired by the Ford F-150 Raptor available in the United States can only boost the car’s image and certainly won’t harm its sales. What do you think of the Ranger Raptor’s pricing? Good value or overpriced? Let us know what you think in the comments below.