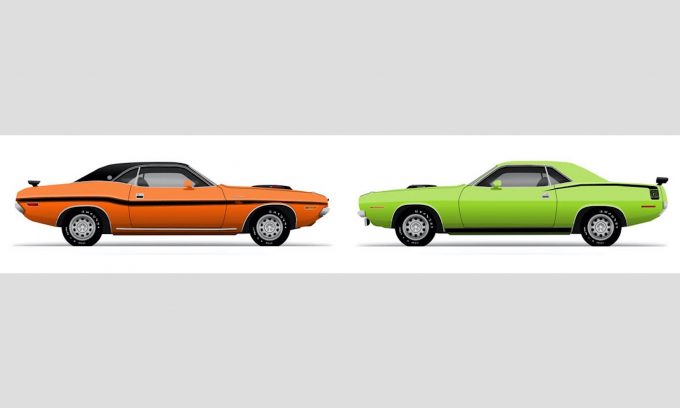 These cars were all created with the risk of having stand-alone sports models rather than economical variants of a larger range of family models including sedan and station wagon bodies. Chrysler had the big Dodge Charger which was well beyond the pony car segment in size and there was also the Dodge Coronet R/T/Super Bee and Plymouth GTX/Road Runner models but they were almost as long and wide. Like the Charger, they were also based on Chrysler’s B-body platform.

The call came to establish a new dedicated coupe platform more in line with the pony car segment, and a new shortened version of the big B-body, known as the E-body, was developed to underpin two new models: the first generation Dodge Challenger and the third (and last) generation Plymouth Barracuda (or ‘Cuda). 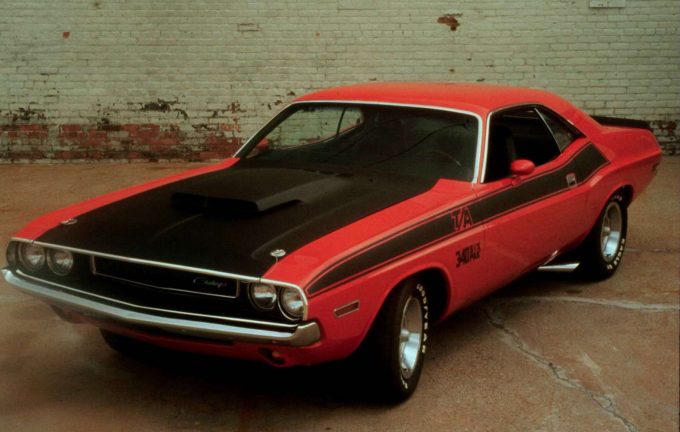 This allowed the Barracuda to also finally shake its family link to the cheap Plymouth Valiant which was based on the compact A-body platform. The Mustang had grown in size and weight since its introduction in early 1964 to meet consumer expectations for design changes, more power (thanks to big block engines), and more metal and standard equipment, and so a shortened version of the wide B-body platform was ideal to allow fitment of similar engines, including the mighty Hemi 426.

As you can see from these stats, the E-body platform came in two wheelbases and the Challenger was also a little wider, due in part to significant body creases which ran along each side and kicked up over the rear wheels. The extra wheelbase of the Challenger also in front of the rear wheel opening.

With these two new different models, Chrysler was able to cover the market segment and aim the Barracuda squarely at the Mustang and GM models, while the larger Challenger was pitted against luxury muscle models such as the Mercury Cougar. Chrysler also provided expansive options lists for both models and allowed a large range of engines to be fitted, copying the super-successful method
of the Ford Mustang in allowing buyers to fully personalise their cars. 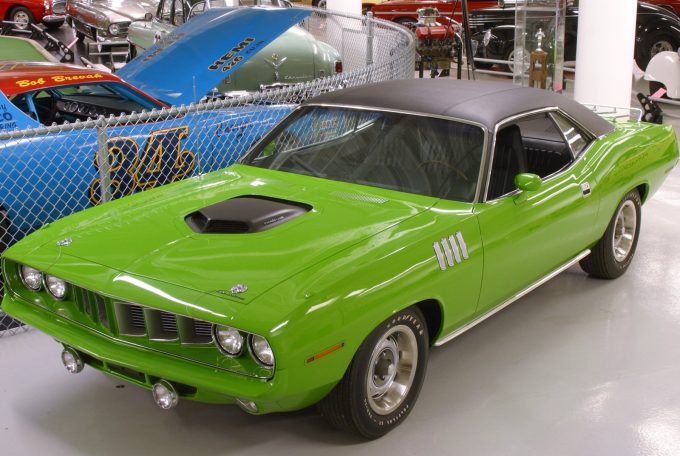 The Plymouth Barracuda came in three models: the Barracuda base model, the nicer Barracuda Gran Coupe and the ‘Cuda, which signified the performance model. A six-cylinder engine or 318 LA V8 was standard on the lower models, with two versions of the 383 Magnum V8 available as options. 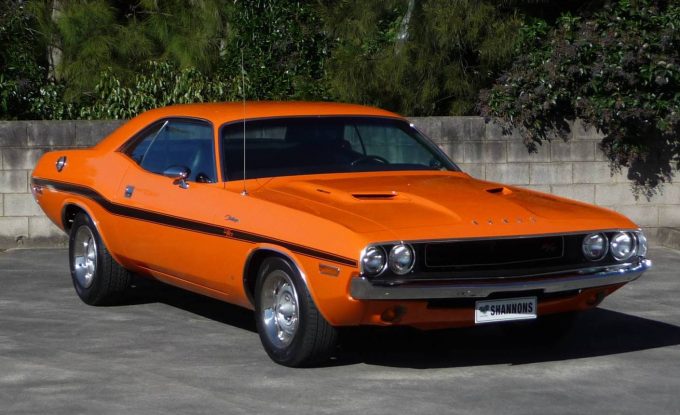 Three- and four-speed manual, and three-speed automatic transmissions were available for both the Challenger and Barracuda. As with many classic American performance cars, 1970 is often considered the best last year for these kind of cars and later years of the seventies aren’t as collectable. With this in mind, the E-body cars from Chrysler certainly arrived quite late in the game and remained in production until only 1974.
1970 is also the most interesting year for the Challenger and ‘Cuda.

For the Dodge Challenger, it was the only year a convertible was available and there was also a T/A version which was produced for homologation purposes to race the Challenger at the Trans Am series. It featured a 340 V8 which produced 320hp (239kW), much more than official factory data claimed at the time. The T/A is easily identifiable by the prominent air scoop on its bonnet and side-
exiting exhaust pipes.

The Plymouth ‘Cuda was available as a factory-prepared race-ready version known as the AAR ‘Cuda, designed in tribute for the All American Racers team. It was fitted with a 340 V8 outputting 290bhp (216kW) and featured unique strobed body stripes, a side-exiting exhaust and a unique hood.

From 1971, engine options and output remained very similar and the usual grille and tail light changes were made, as well as new body stripes. Despite this, sales of the E-body cars dwindled as the muscle car wave began to fade out due to rising insurance costs, rising fuel prices and more safety awareness.

Large two-door cars soon became much less popular as increased safety regulations added weight to the cars and the engines lost power due to stricter emissions requirements. The big block V8s were also discontinued from 1972. Production ended in 1974. Due to their brief production run and very low numbers built after 1970, the E-body Challenger and ‘Cuda are now very highly collectable.