The 2020 Tesla Model 3 Performance could be one of the most important new cars launched this year and one we’re excited to test. When the Model 3 was announced in 2016, a whopping 325,000 deposits had been laid down within the first week. This unprecedented popularity is one of the reasons legacy manufacturers have been scrambling to make rivals of their own.

With such an extraordinary amount of hype, has the 2020 Tesla Model 3 been worth the wait? We tested the $98,624 (before on-road costs) Performance flagship to see what the fuss is about. 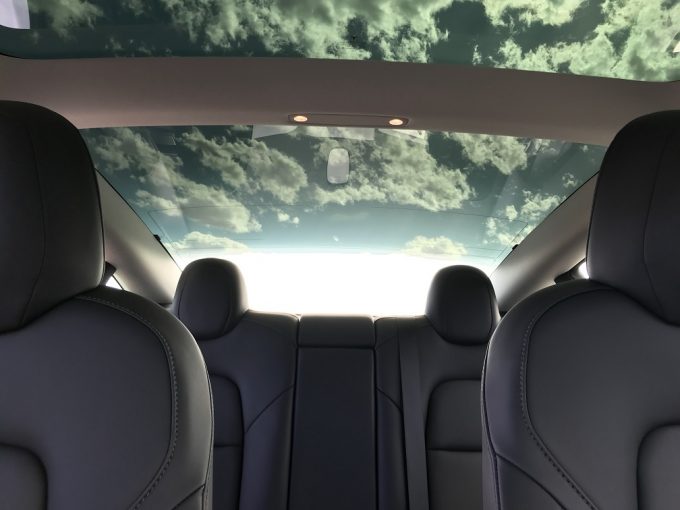 Push back on the flush door-handles and you’re greeted by a minimalist cabin, consisting of a 15-inch touch screen, a three spoke steering wheel and very little in the way of buttons. Visually, this approach is quite refreshing and combines with clever packaging to afford the car more space than its dimensions would suggest.

The Model 3 measures 4694mm long, is 1933mm wide and 1443mm tall, with a wheelbase of 2875mm. There is room in the front and rear for five adults. Legroom in the rear is unexpectedly generous, easily comparable to a car from the large segment despite its much shorter length.

Because of the minimalist approach, you’d be forgiven for expecting a steep learning curve. Once acclimatised, it’s intuitive and you adapt a lot quicker than you’d think. An example of this is the cruise control, which is activated by pressing down on the gear selector stalk.

The theme of minimalism permeates beyond the aesthetic and into the functionality of the car. On the whole we’d call it successful, if not entirely flawless. Functions such as HVAC vent positioning and radio look nifty on the screen, but require too much attention from the driver while in motion.

Also, there is a reason Ford has elected to incorporate a knob on their upcoming Mach-E’s touch screen. While we’re griping, the indicators don’t feel like they don’t self-cancel at times and the lack of Android Auto and Apple CarPlay is somewhat surprising.

Where the Model 3 makes up for those shortcomings is with the entertainment options within its infotainment system. Netflix (while stationary), an amusing ‘fart’ mode and a games arcade function which even includes a racing game that utilises the car’s steering wheel and pedals. We’ve never experienced anything like this in a car and it really adds to the character and novelty of the vehicle.

Other features include a fireplace mode that warms the car and plays sultry tunes, plus the Mars map mode as seen in the Model S. Audio quality is outstanding while the graphics on the satelite map were similarly impressive and exude sophisticated modernity. Recent upgrades courtesy of Software Version 10.0 even includes ‘Caraoke’ –and remember, it has over-the-air updates so you don’t need to visit Tesla to receive them.

On the topic of ergonomics, if you approach car with both hands full, the flush door handles can become somewhat of a nuisance. The Model S’s protruding door handles and electronic tailgate closing are missed on its little brother. 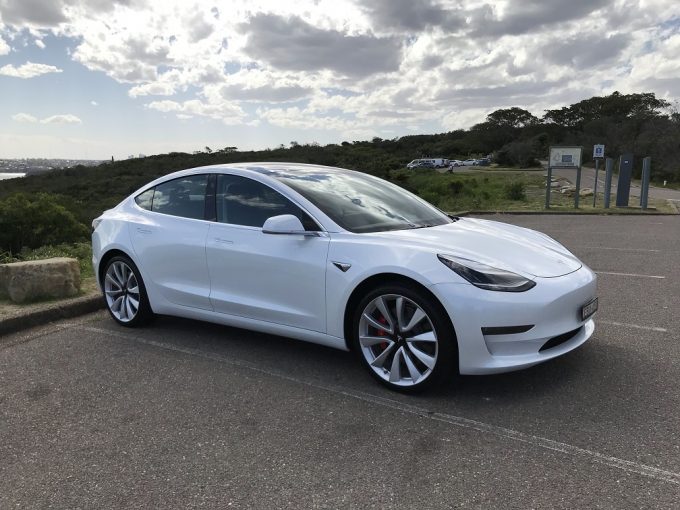 The Model 3 features an unmistakable design with svelte proportions and a low front end – since it doesn’t need to accommodate an engine. From the A-pillar back, there is a familial resemblance to the Model S, in the same way a Mercedes-Benz C-Class is reminiscent of the E-Class, or a BMW 3 Series resembles the 5er. Happily, the Model 3 scores a very unique styling treatment for its front end, eschewing the cookie-cutter approach of other car makers.

We’ve covered the minimalist theme inside the car, as it also encompasses the functionality and ergonomics of this car. With the polarised glass roof, the airy feel of the cabin is accentuated and it’s a very zen place to spend time.

Our test car had a black interior with a gorgeous open-pore wood panel spanning the width of the dashboard. Somewhat less pleasant elements included the piano black lids for the (very large) centre console and fiddly phone charging mount – If the Hyundai Kona EV can feature a wireless charging pad, why can’t the Model 3?

As with its bigger brother the Model S P100D tested earlier this year, acceleration and performance is scintilating. 0-100km/h in 3.4-seconds thanks to 335kW and 640Nm, but it’s the sudden surge that catches you off-guard and contributes to the thrill factor.

Two modes of regenative braking are available: Standard and Low. This is far simpler than other EVs that use steering paddles, which is overwhelming for someone who has just stepped out of a petrol vehicle. This another way where Tesla has an edge over legacy automakers, which seemingly have too many people making decisions by committee. 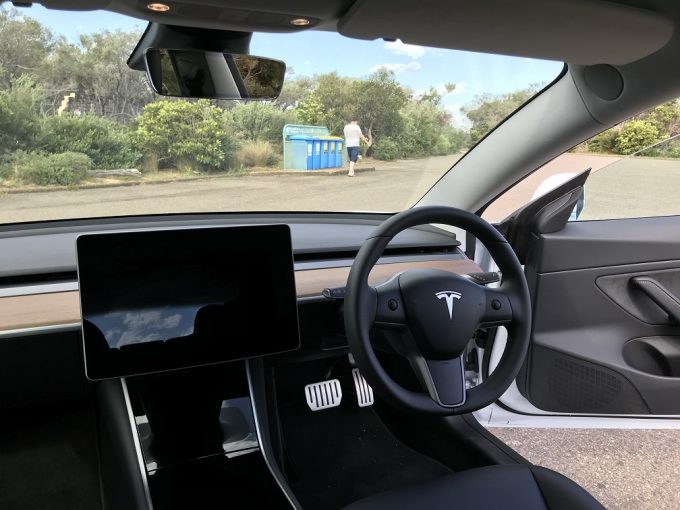 As it possesses a single reduction gear rather than a typical gearbox, this area will focus on the operation of the drive mode selector, to the right of the steering column. There is no on-switch for the Model 3. Moving is a simple matter of foot on the brake and selecting Drive or Reverse. The car can be configured to creep automatically like a normal automatic car, or you can switch this feature off. 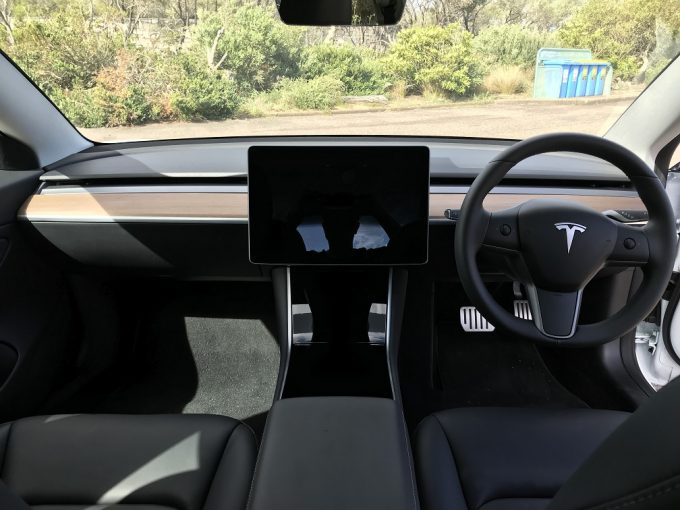 With larger wheels, a carbon fibre lip spoiler and upgraded brakes, the Model 3 Performance is visually differentiated from its lesser brethren.

A low centre-of-gravity and high grip levels from the 20-inch wheels shod with Michelin Pilot 4S tyres means you can carry enormous amounts of speed through the bends. Switch the steering mode to Sport and it becomes weightier and more direct, helping you place the car more confidently.

Due to the ferocity of the power delivery in Sport, you can approach the car’s grip limits quicker than you might expect. Steering is somewhat wooly and we’d welcome more feedback to telegraph that this limit is approaching.

We’re very keen to try the Model 3 Standard Range Plus, which weighs 1609kg compared with 1856kg for this model to see if the almost 250kg weight difference results in more agility. 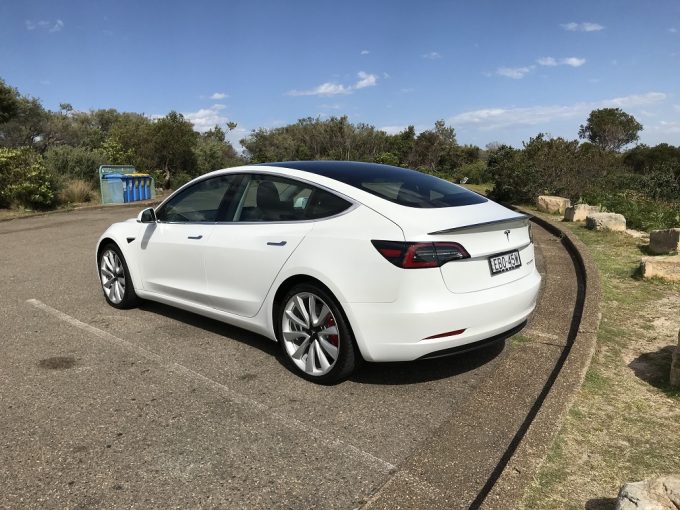 A drag coefficient of 0.23 means the Model 3 slices through the air with minimal disturbance. The silence of the electric powertrain usually unearths other noise paths in EVs but these seem to have been suitably pacified.

Suspension compliance is outstanding, with a supple ride that was not upset by bumps of any amplitude. For a vehicle shod with low profile tyres, this is a commendable achievement.

If you specify this Performance version rather than the $89,514 Long Range version, the 0-100km/h drops from 4.6 to 3.4 seconds, but there is also a range penalty: 560km NEDC versus 620km for the Long Range. To be clear, 4.6- seconds is still outstanding performance, but whether it’s worth 60km of range is up to the buyer.

Our experience with the car indicated that 560km is adequate range for most situations. If you occasionally take long distance trips, you probably wouldn’t want any less, but the abundance of Tesla’s Superchargers meant we never waited more than 90 minutes to charge our vehicle from as low as 10 per cent battery.

As expected, the Model 3 scores exceedingly well for passive crash safety, but the real kicker is Tesla’s semi-autonomous Autopilot system. With its array of cameras, the car is always able to scan for potential threats and act accordingly if the system is activated.

On the security front, Sentry Mode uses the aforementioned cameras to start recording if any movement is detected close to the vehicle. 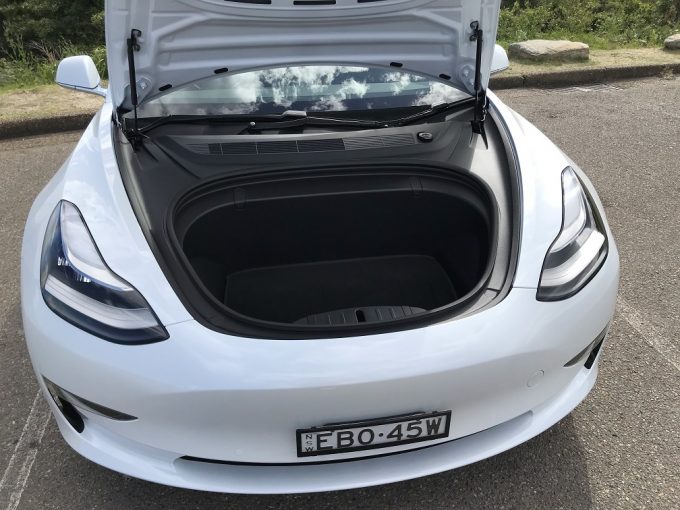 As of 2019, electric cars are generally still expensive. Take the Hyundai Kona EV for example, which asks for a significant premium over its petrol counterpart. When you consider the Tesla Model 3 Performance offers BMW M3-equalling thrills for over $40,000 less, the value equation suddenly becomes very compelling. 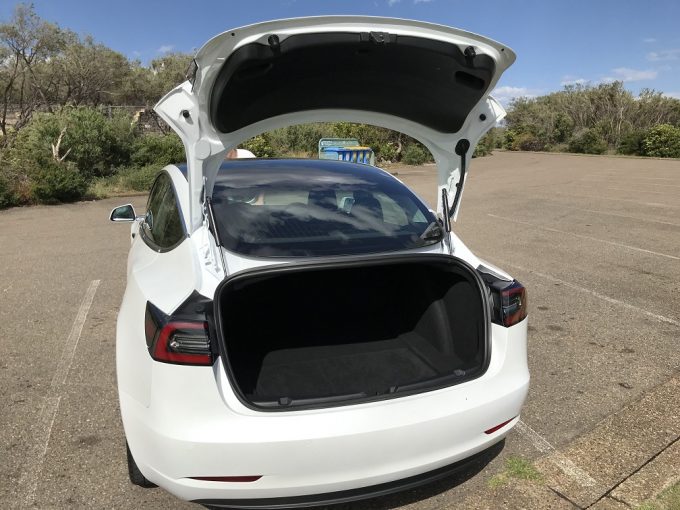 Tesla makes environmentally-friendly motoring sexy and fun in a way that grabs people even if they aren’t automotive enthusiasts. A thoughtful and holistic re-think of what a car can be means the Model 3 is nothing short of a revelation. Granted, it’s still not for everyone — EVs still have their limitations for country driving, towing and some people prefer the aural charm of a fossil fuel burner. But with each passing day, those negatives are diminishing.

As the risk of over-indulging on the hype, the Model 3 gives rivals a lofty benchmark for range, design, fun, functionality and safety. Cars will, as a whole, improve drastically due to the Model 3’s existence.