The awesome new Honda Civic Type R has only just gone on sale in Australia and some other parts of the world. But it looks like tuners overseas have already developed some tuning options, such as UK’s Miltek Sport. 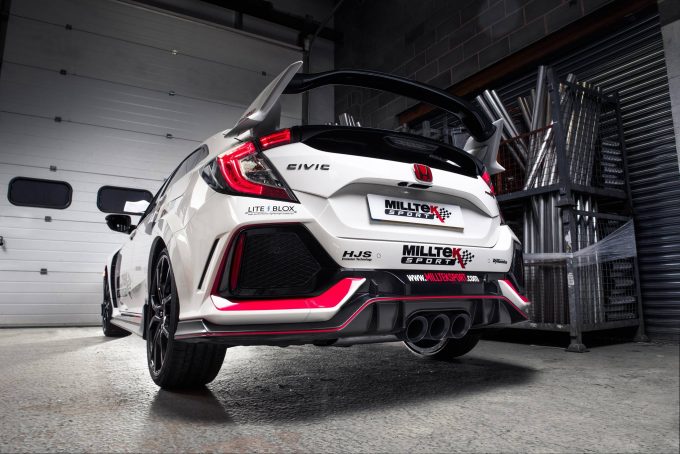 Miltek Sport has designed a cracking aftermarket exhaust system for the new Type R that gives the 2.0-litre turbo four-cylinder engine a distinct rally car note. The firm has released a quick teaser video onto its Facebook page giving us an earful of its sound.

The factory engine produces 228kW and 400Nm, which is enough to help the Civic hatch clock a record lap time around the Nurburgring. It recently set a front-wheel drive record of 7:43.8. Honda also claims a 0-100km/h time of 5.7 seconds, which is one of the quickest factory times for a front-driver.

As for the Miltek exhaust offerings, all retain the factory three-outlet design at the back, but further underneath the company offers custom resonators and muffler replacements, as well as full-noise systems that aren’t suitable for the public road.

There’s no speak of any performance gains although we’re sure they all offer some power increases, or at least some changes to the power and torque bands through the rev range. Orders are being taken now, with the first batches coming in by mid-November.

For Australians, the new Civic Type R is on sale now priced from $50,990. It goes up against the likes of the Volkswagen Golf R, Ford Focus RS, and the Renault Megane R.S., all of which are all-wheel drive except the Renault. All are priced very similarly too.