The 2017 Honda Civic RS dives into the small car segment as something of a warm hatch. It’s not quite fast enough to be a hot hatch but it’s got the looks and sporty connotations to make it more exciting than a regular hatch. Practicality, functionality and dependability are also strong traits that should lure you in enough to take a closer look. 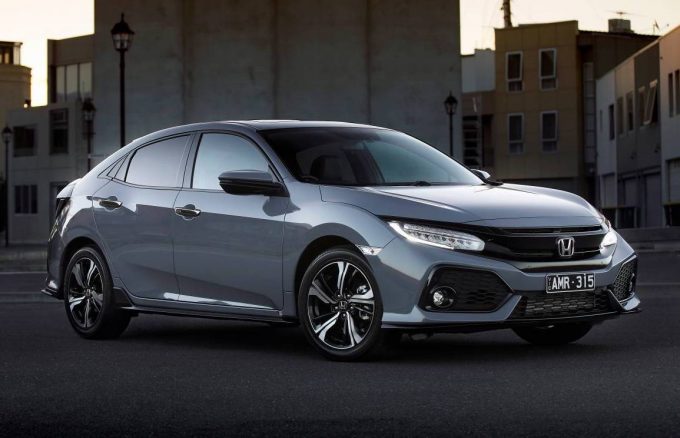 This is one area where the Civic RS trumps the rivals. It’s huge in here. Headroom and legroom are abundant, and it’s all a clean and clutter-free design. Rear seat space is especially outstanding for this class, with deep and wide footwells, with a relatively flat floor for improved middle-seat comfort. The seats are soft and quite large in the front, adding to its long-journey capability.

Honda’s touch-screen media interface can be a little perplexing, like most systems really. It’s filled with enough technology and applications to keep your savviest of passengers happy, with Apple CarPlay and Android Auto at the ready to sync some of your phone’s apps right onto the screen. Even though the RS is positioned near the very top of the range it doesn’t come with sat-nav for some reason. Instead, you have to use your synced phone, which is okay but it does lose points compared with rivals.

Ergonomics are wonderful. The Civic has always possessed a great natural driving position, and the same can be said of the latest hatch. The height-adjustable driver’s seat can have you sitting low if you like a hunkered down position, or you can lift it right up for more of a view of your surroundings. 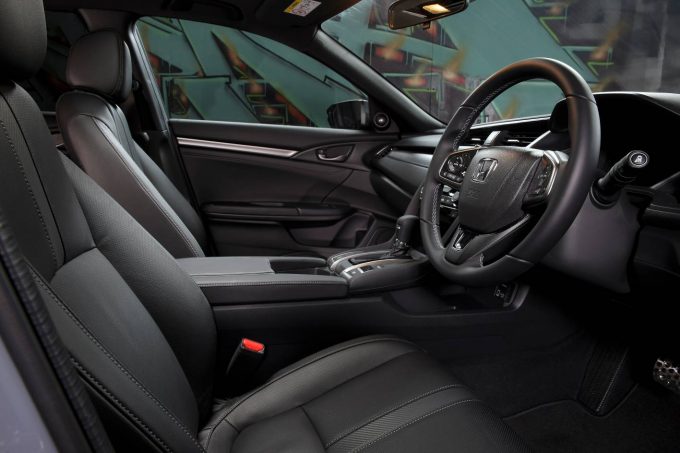 Hmm, this is going to be a hard one to judge. Most people we asked aren’t exactly attracted to the design in the true meaning of the word, with spectators suggesting it looks too busy and complex. However, we will give it some points for being daring and a bit courageous. In this very popular class, it can be nice to stand out from the crowd. If you look closely you’ll notice some quality attention to detail too, in the way the bumper bars meet the body and continue the sharp contours, and the aggressive rear end that can be had with twin centrally-mounted exhausts. It definitely stands out, we’ll give it that. It might age rather well too, as we move into the next decade – compared with the rivals.

When we first heard about the new 1.5-litre turbocharged four-cylinder engine, we were very excited. Finally, we thought, Honda is providing some sportiness and going back to its roots. And on paper, all of this is true. The little VTEC turbo produces 127kW and 220Nm, making it one of the more powerful mild hatches on sale. However, this doesn’t translate all too well as it goes through a CVT automatic. We don’t have a big problem with CVTs, but in a sports-oriented model like this it does detract from the overall driving enjoyment. Aside from this though the Civic RS goes well. It gets up to speed with no trouble at all, and overtaking doesn’t feel like it’s a stress for the engine no matter how heavy the load you’re carrying. Acceleration across 0-100km/h takes 7.5 seconds.

As a CVT, the unit in the Civic is quite good. It doesn’t whir and whine too high and loud like some CVTs, and it seems to give the engine an increased sense of torque by elastically slingshotting the car. In the Honda Civic RS, we feel it is a problem as it does reduce the excitement of the badge, the sporty looks, and the overall driving enjoyment as mentioned above. Other markets around the world are offered a six-speed manual. 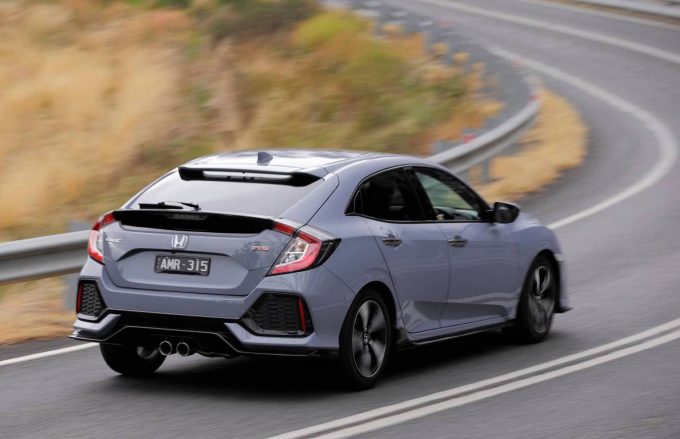 Featuring MacPherson front struts and a fully independent multi-link rear suspension setup, the 2017 Civic hatch is made to handle. The motion adaptive electric power steering is very nice as well, providing great feedback and confidence. It’s actually very difficult to upset the balance through bends, it stays completely flat and neutral no matter how hard you dare to push it. About the only weak point is the 215-size tyres, which we think are a touch too small as others in this segment, like the Hyundai i30 SR, feature 225 tyres. Still, the Civic is right up there as one of the best-handling hatches in the class.

One of the best aspects of the Civic RS is that it’s not fitted with overly stiff suspension. It handles very well, as discussed above, yet the ride is compliant and absorbent over the harshest of surfaces. We have absolutely no complaints here. Noise and vibration levels are also above class standards thanks to Honda’s traditional attention to detail and exceptional build quality. You won’t hear any creaks or rattles inside, with all surfaces made from quality materials except for some parts of the dash and door trims. 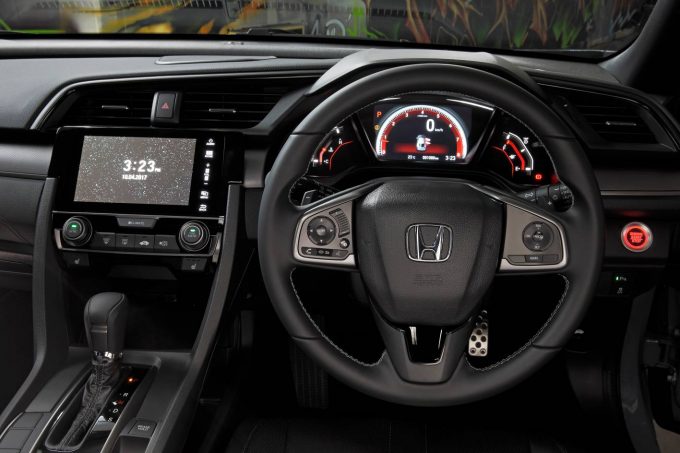 Honda Australia provides the industry-standard three-year/100,000km warranty standard. It doesn’t cut above the rest, like the five-year i30 and seven-year Kia Cerato. Running costs are also slightly higher than most due to Honda’s instance on using genuine Honda oils and parts. This can push out repair costs. Fuel economy though is very impressive. The official rating is just 6.1L/100km and you can expect to get very close to that in real-world driving conditions. Others in the class offer similarly good official figures but balloon out when it comes to real-world driving. This is obviously helped by the eco-friendly CVT auto.

All Civic variants (except base VTi) in Australia come with Honda’s extremely clever Lane Watch system. Every time you flick the left indictor on the media display turns into a view from beneath the left side mirror, under which a camera is mounted. This gives you a clear view of the blind-spot. Other technologies on your side include a plethora of airbags, vehicle stability assist and something Honda calls Straight Driving Steering Assist, and tyre pressure monitoring. All up, it’ll come as no surprise the Civic range has been rated five stars by ANCAP. 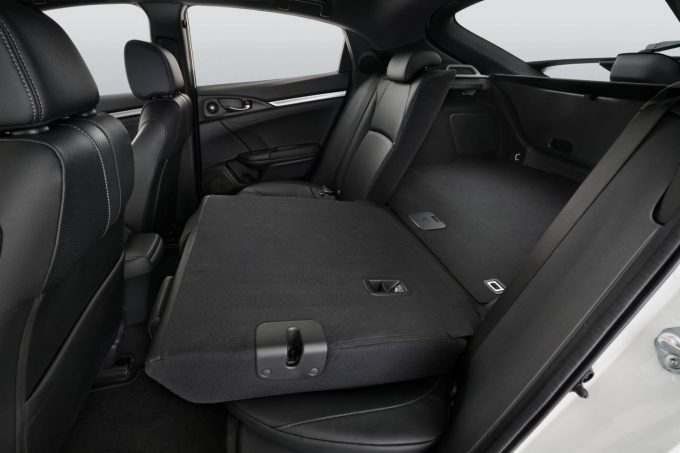 Considering the sheer cabin space, the clever safety technology, and the amount of standard kit including the comprehensive media touch-screen, we think the Civic RS is excellent value being priced from $32,290 (before on-roads). You’re also getting a semi-premium quality and decades of engineering expertise. The only part of the equation that lets it down is the initial starting price. You can get a similar package from Hyundai in the i30 SR dual-clutch auto for $28,950. But we think the Honda Civic RS has the edge in terms of driving dynamics and size.

This is a great proposition from Honda. The sporty garnishes of the RS give it a unique touch in the otherwise pretty boring small car segment, with some cool colour options available such as a flat grey as featured here. It’s a real shame the beaut new 1.5L turbo engine is mated to a more engaging gearbox, but in all other areas the car really outshines most in the class. Economy, cabin space and comfort, and credible performance with superb handling are things you should note down as true class benchmarks. 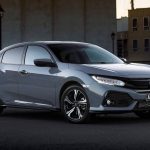 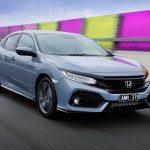 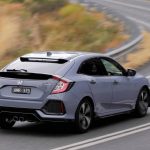 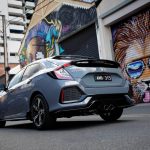 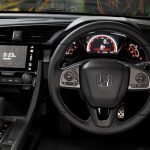 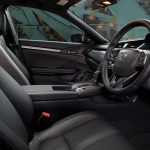 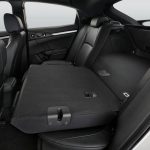 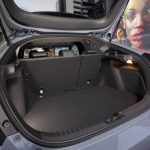