A new war is raging in the premium automotive sector, which is part of one of the most dramatic industry changes in history, surging through the car world like an electromagnetic pulse. 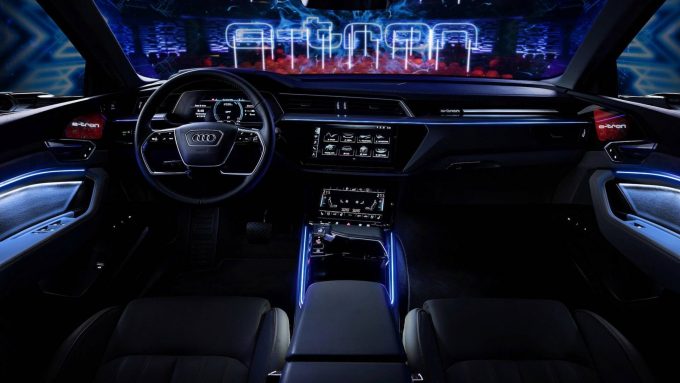 I’m talking about the rush to develop and bring electric cars to market, and Audi has shown off its latest contender- from the inside at least anyway. The 2019 Audi E-Tron electric SUV has already been previewed via a prototype shown at the Geneva Motor Show earlier this year, but now the interior has been revealed as well.

The most prominent feature from the interior would have to be the door-mounted screens that project images from the exterior camera. This could be the first production vehicle to feature ceameras in lieu of side outside rear-view mirrors. The benefit of this is better aerodynamic performance for increased battery range. The rest of the interior is pretty consistent with Audi’s latest theme as seen on the recent A8, A7, A6 and A1 models. This means a Virtual Cockpit display in the instrument cluster, a large infotainment screen and a separate screen for the climate control functions as well. This brings the screen total to five, which has got to be a new record for a production car.

The gear selector differs from its four-ringed brethren in that it appears to have a large, fixed leather handrest with what appears to be an aluminium slider for drive selection. A Bang & Olufsen 3D Premium Sound Sytem transmits pleasing sound frequencies to the ear lobes, while tailored soundproof keeps undesirable noises away from them. Particular attention, Audi says, has been paid to wind noise above 85km/h, allowing a comfortable conversation volume to be maintained for passengers.

Customisable ambient lighting also stamps this as the most technically-advanced Audi, which was initially scheduled for an August 30 debut at the Brussels Motor Show, but that reveal has apparently been brought forward by the unexpected arrest of CEO Rupert Stadler. The Jaguar I-Pace and Tesla Model X rival will go on sale in early 2019. We will bring you more details as they come to hand. 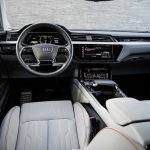 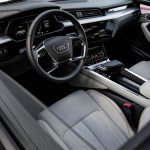 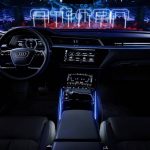 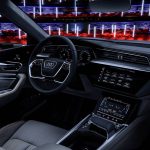 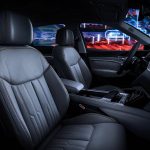 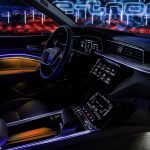 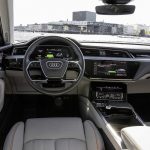