Despite the segment’s growing dominance, only one ute has truly threatened the dominance of the Toyota HiLux in recent years and that’s the Australian-developed 2017 Ford Ranger Wildtrak. When the current shape was introduced in 2012, it was lauded for being one of the largest, safest (first to achieve five-star ANCAP) and car-like (in terms of standard features) utes on the Australian market.

Since then, it has had a comprehensive makeover, spawned an SUV wagon version – the Ford Everest – and got its biggest boost so far when Ford announced at this year’s Detroit motor show that the Ranger will be produced in the USA with a revived Bronco. This is the affirmation of Ford Australia’s capability that it never received for the Falcon, which suffered ‘not-invented-here’ syndrome.

The competitiveness of the segment is always ramping up, with all the established players constantly sharpening up and new competition from Chinese arrivals and even a Mercedes pickup in the form of the upcoming X-Class. Bearing all this in mind, how does the Ranger stack up? We tested the $59,950 Ranger Wildtrak ($61,790 for auto) to find out. (All prices exclude on-road costs.) 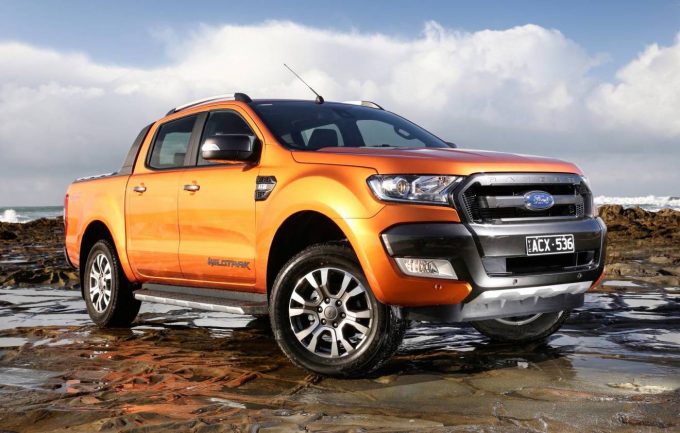 Being one of the larger vehicles in the segment – at 5426mm long, 1860 mm wide and 1848mm tall, on a wheelbase of 3220mm – large car space for five occupants is a given. It had to be for US market consideration. The partial leather seats are supportive with electric driver seat adjustment and seat heating.

Tray dimensions are generous, albeit without sufficient width to accommodate a standard pallet like the Volkswagen Amarok can. Nevertheless, inclusions like 12V power supply in the tray are handy for those who like adventurous weekends. The roller shutter adds a great aesthetic to the Wildtrak, but might impinge on load space for more serious work.

Inside, the Ranger’s phone connectivity, audio and navigation are powered by Ford’s SYNC 3 infotainment system that includes voice commands. The stereo includes digital radio and the navigation offers split-screen capability. Climate control functions are also controlled via the screen, with secondary buttons and knobs for temp and fan but direction must be selected on the screen. The partially digital instrument cluster offers a wealth of clear to understand information.

The strong and masculine styling of the Ranger was penned Down Under (with much overseas input) and is one of the reasons for its success. The Ranger is no show pony, designed to be functional as an off-roader ute, and things like large interior knobs that can be operated with gloves that echo the US-based F-150. In our opinion, it manages to be modern and tough-looking at the same time without the awkwardness of some competitors such as the Mitsubishi Triton. 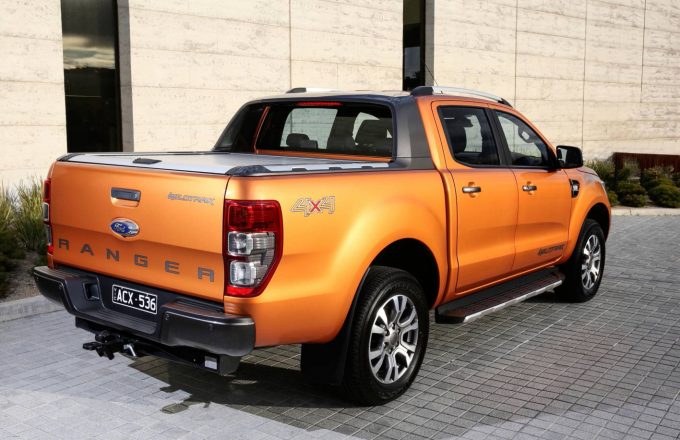 The sole engine for the Wildtrak is a 3.2-litre turbo-diesel five-cylinder that generates 147kW at 3000rpm, and 470Nm at 2500rpm. Some rivals claim a higher torque output that is delivered at higher revs and thus don’t feel as effortless (Holden Colorado). While the five-cylinder configuration does produce a strange and rattly note, noise is well contained from inside the car at cruising speed thanks to tricks like active noise cancellation developed for the more urbane Everest.

Engine response is most un-diesel-like and rapid, with excellent pull in every gear. With a 3500kg towing capacity, you don’t get the impression it would struggle with anything approaching that level. As for acceleration, we timed a best of 10.2 seconds for 0-100km/h.

Six speed manual and six-speed automatics are available on every Ranger. The manual does have a slight notchiness to it but it is a heavy-duty commercial vehicle after all. The gates are smooth and shift action is light and easy, perfect for daily use even in heavy traffic. The same goes for the clutch operation.

The automatic is very well calibrated and never hunts. It has a manual selection mode with the orientation of +/- the same direction as the Falcon was. There is a rumour that the next Ranger could use the 10-speed automatic destined for Mustang and many GM products.

This is where the Australian connection shines brightest. Stability, bump absorption and composure are always top notch and better than you could expect from a vehicle of commercial origins with a 950kg payload. The steering is feelsome with more feedback than rivals, so it is one of the most confidence-inspiring handlers of its class. Body roll is almost non-existent and overall grip around corners is impressive for a 4×4 ute. 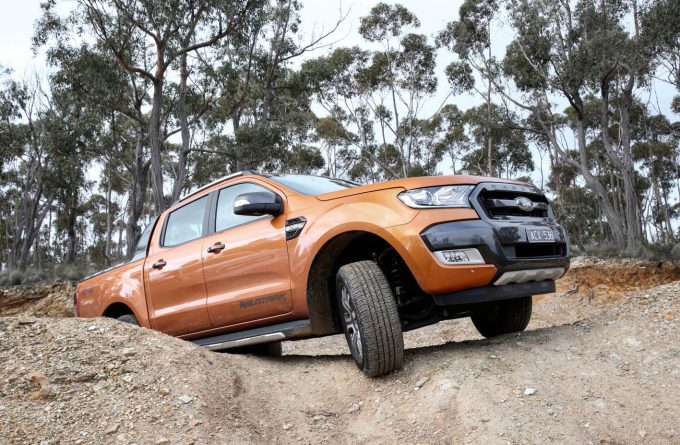 The Ranger has 237mm of ground clearance and 800mm of wading capacity – impressive considering a snorkel isn’t standard fare. 4X2, and high/low range 4×4 modes are switchable via a convenient knob near the gear selector. A rear differential lock is standard, but it doesn’t come with special terrain modes or a centre diff lock like in some rivals. A departure angle of 21 degrees is not as good as the more utilitarian XLT that has a 27-degree departure angle, but the approach is identical, at a respectable 29 degrees. Overall, we’d put the Ranger Wildtrak near the top of off-road performance for utes, but just short of the absolute top. That would go to the Toyota LandCruiser 70 series or the Triton Exceed with their multiple diff locks.

The Ranger is quiet from the inside thanks to the aforementioned active noise cancellation and extra sound deadening inherited from the Everest program. A subtle trace of the five-cylinder’s gruff note seeps through the cabin only occasionally. This could potentially be allayed by the inclusion of a V6 diesel for the next model currently under development. In all, the comfort and refinement levels are better than you could rightfully expect of this kind of car, adding to its breadth of capability. 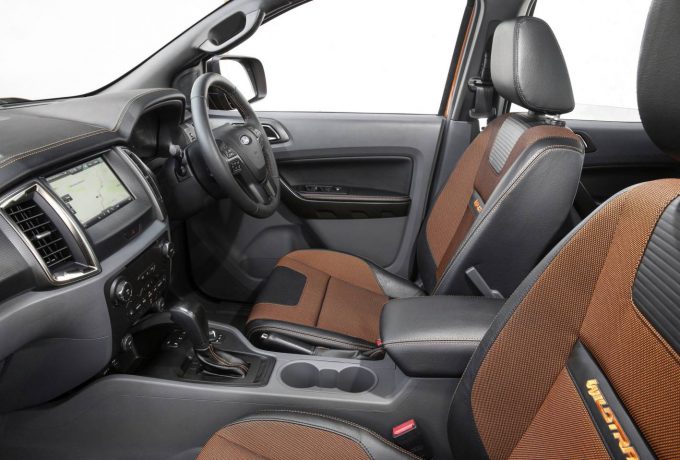 Claimed economy is an impressive 8.4L/100km. Because of the lag-free nature of the engine, we were able to achieve 8.9L/100km. Plenty of rivals with more lag require a bit more of a caning to get along, so there is more of a disparity between lab and real-world results.

The Ranger has a three year/100,000km warranty and capped-price servicing at 15,000km intervals averaging around the $400 mark.

The Ranger was the first ute to achieve a five-star ANCAP safety rating in its class thanks to an arsenal of airbags and DSC. The PXII added trailer sway control, lane departure warning and the availability of adaptive cruise control and autonomous emergency braking, and steering assistance as part of a $600 tech pack. 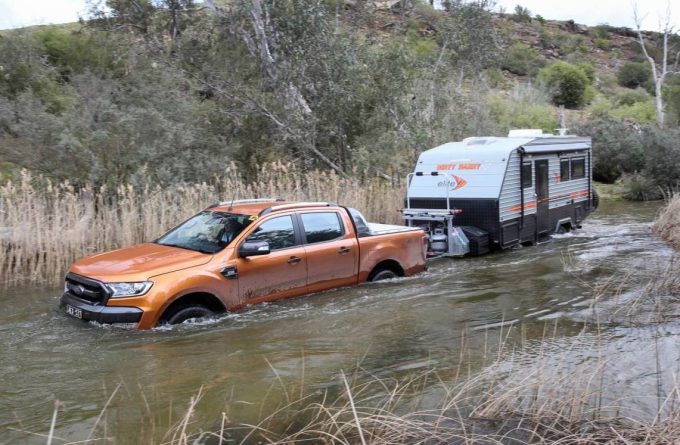 In terms of pricing, the Ranger Wildtrak doesn’t sit at the value end of the spectrum where you’d find Chinese utes such as Fotons and LDVs or even the Triton. Nor does it have the more premium positioning of an Amarok, the long warranty of some, or the expected retail of the upcoming X-Class. It does have features not offered in others, and considering its breadth of capability, we think it is good value.

Until the 2018 Ranger Raptor arrives, the Wildtrak is king of the hill. As soon as it was first introduced, it developed a huge following as a genuine alternative to the Toyota HiLux SR5 and Colorado ZR1. The upgrades mooted for the next-gen model potentially include a V6 engine, 10-speed gearbox and coil-sprung rear end that mean Ford is very serious about remaining a favourite in the class. As it stands though, the PXII Wildtrak is a pretty complete package as is. 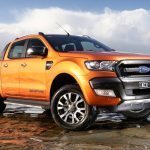 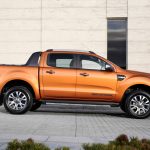 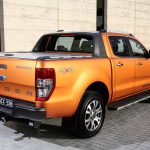 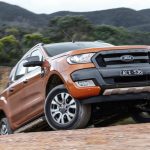 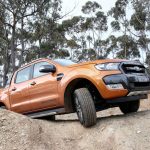 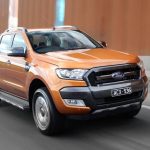 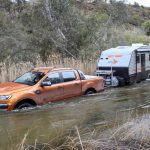 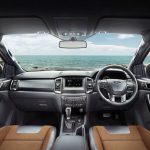 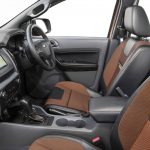 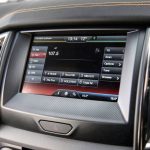 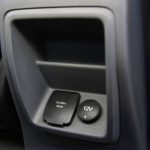 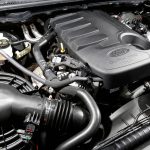