Kia’s four-door sports coupe has been with us since late 2017 and has made quite a significant impact in that time. Serving as a halo model for the wider Kia range, the rear-drive Stinger has set new standards for the brand and remains the most affordable way to get into a four-door, turbo six performance car.

When the Stinger was launched, comparisons with the condemned Holden Commodore and Ford Falcon were inevitable. This is because those two are inexorably tattooed into our automotive landscape and possess the aforementioned attributes of rear-drive, value-for-money and high performance.
The Stinger also follows their legacy with several local police departments including Queensland and Western Australia adopting the rapid Korean as their highway patrol vehicle of choice.

Sales have been steady, with the Stinger accounting for 16.3 per cent of the large car segment (VFACTS) in 2018, shifting 1957 units in its first full year on sale.

We borrowed the top-of-the-line, $60,490 GT version to see if it remains as appealing as it was at launch. 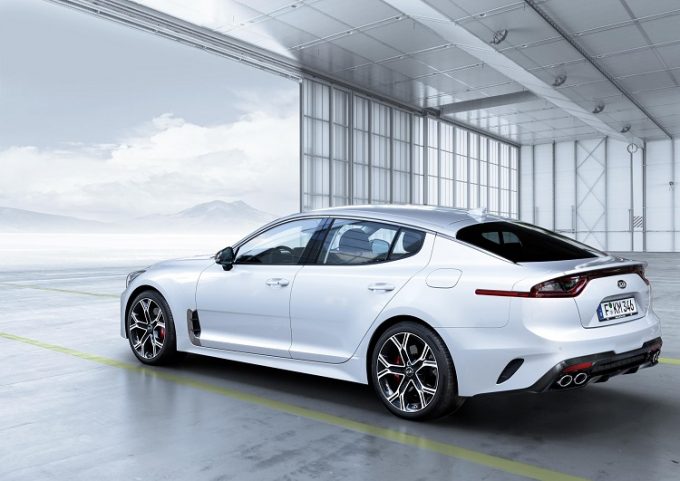 The Stinger’s proportions are sleeker than a conventional sedan, resulting in a much lower and wider form factor.

At 4830mm long, 1870mm wide and 1400mm tall with a long wheelbase of 2905 mm, accommodation is still generous – even rear headroom, despite the Stinger’s tapering fastback turret. Five passengers can luxuriate in the red Nappa leather seats with no hassles- especially the driver, who is treated to an eight-way power adjustable seat, including bolsters, thigh extender and lumbar. Heating and cooling is available for both the driver and front passenger.

Combined with the electrically adjustable steering wheel, a superb driving position is eminently achievable.
Kia calls the Stinger a Grand Tourer and with these features, it lives up to that label very well.
Opening the hatch reveals 406 litres of boot space, which can be increased to 1114L with the rear seats folded flat.

Stinger GT’s cabin design is an upscale affair and befitting of its price tag. The steering wheel is a delight, both to hold and behold, with excellent grip and well-placed buttons. The soft-touch material along the dashboard is a delight as well, contrasted by polished metal highlights and the aformentioned red Nappa leather. The uncluttered stereo and HVAC layout features logically placed buttons for all the main controls, and instant familiarity for first-time drivers. The head-up display (HUD) kept driver attention where it needed to be at all times, which is crucial when we are dealing with this kind of power and performance.

An 8.0-inch screen sits atop the three circular vents, with great clarity and user-friendliness. One thing we weren’t prepared for was just how outstanding the 15-speaker Harman Kardon stereo sounds. It can dial up as much bass and volume as your eardrums can withstand, with no loss of sharpness or clarity. A truly premium sound system which did justice to any music genre we could throw at it.

When the production Stinger first bowed in 2017, it made a huge impact, as the most powerful expression of design boss Peter Schreyer’s ‘Tiger shark’ design language. It’s long and low, and exudes a sense of occasion compared with your run-of-the-mill sedan.

Sleek is the word that springs to mind when casting your eyes along the Stinger’s slinky silhouette, with highlights including the chrome vent and 19-inch alloys.

The Stinger GT is powered by a 3.3-litre twin-turbocharged V6 engine, with 272kW and 510Nm, which powers the rear wheels via a eight-speed automatic gearbox with paddle shifters. With quoted acceleration times of 4.9 seconds for 0-100km/h and a top speed of 270km/h, there is nothing else in this price segment that offers this much pace and space.

Launch control and a drive mode selector help you maximise acceleration when the mood arises, while Eco and Comfort modes give the car a more laid back character. Turbo lag is virtually non-existent, with outstanding throttle response accompanied by a refined exhaust burble- especially in Sport mode.

A four-cylinder version is also available, with a 2.0-litre turbocharged four-cylinder, developing 182kW and 353Nm from as low as 1400rpm. A still-rapid 6.0-second 0-100km/h time is quoted for the smaller-engined model.
For those who tow boats or caravans, the Stinger GT has an unbraked towing capacity of 750kg, or 1500kg braked.

All variants of the Stinger feature an eight-speed automatic transmission with steering-mounted paddle shifters. Depending on which driving mode is selected, the transmission behaviour varies from relaxed and unobtrusive to an almost DCT level of responsiveness.
When you are using the paddles to change gears, Kia lets you do all the shifting, rather than an early upshift or downshifting intervention that spoils the fun. For fans of manual transmission, there is no such option here, but as far as automatics go, this one is very engaging and precise.

With a staggered tyre setup featuring 225/40 R19 front and 255/35 R19 rear rubber, the GT is set up to get as much of its power down to the ground as possible. A low centre of gravity and quick steering that’s not frenetic is truly confidence inspiring through the bends, giving the Stinger the agility of a much smaller car. At all times it feels planted, with the engine far back in the 1780kg car to keep weight transfer relatively neutral. Electronically controlled damping is noticeably firmer in Sport mode, keeping the car pinned to the asphalt. A big tick for driving fun, then.

A high grip threshold and limited slip differential mean this car is driftable, but not without a high degree of familiarisation. If this is your preference, the $49,990 330S has narrower 225/40 tyres on the rear with the same drivetrain- but we don’t advise trying such antics on public roads.

While the 11.2 metre turning circle is somewhat unwieldy and the proportions of the car can make it feel awkward to park at first, the surround-view and reversing cameras, as well as parking sensors compensate and you quickly learn to confidently place the Stinger in the tightest of spots. Rear cross-traffic alert and autonomous emergency braking (AEB) are very handy allies in the city.

Stinger’s solid body shell and well-insulated cabin makes it as refined as any European touring car we can think of, with no intrusion into the cabin of unruly tyre roar or wind buffeting. Adults and kids alike could sleep in the back with no trouble whatsoever.

If we were to level one criticism, however, it’s that the ride is a touch on the firm side, lacking the compliance that large Australian cars used to have. It’s not bone-jarring, though, and only noticeable on the sharpest of speed bumps.

Like all new Kia vehicles, the Stinger is covered by a capped-price servicing program. In the case of the Stinger GT, the intervals are 10,000km and prices vary from $324 for the first visit up to $871 for the 70,000km one, with a calculated average price of $524 over the capped price service schedule.

Happily, the Stinger will accept 91 Octane, non-premium fuel but its 60-litre tank means the time between fills may be a little on the short side if your commute is predominantly urban. Average consumption is quoted as 10.2L/100km, which comes down to 7.5L/100km on the highway or 14.9L/100 for urban.

There was controversy in December 2017 when some variants of the Stinger were awarded a 3 star ANCAP score.
Some felt this unnecessarily harsh given the car’s solid performance in actual occupant protection. Since then, autonomous emergency braking (AEB) and lane-keep assist have been added to the entire range, instead of upper variants as before. It now scores the full five star rating, as you can read in ANCAP’s report here. http://www.ancap.com.au/safety-ratings/kia/stinger/4e81e8

A very strong showing here, even at the top-of-the-range. The GT’s standard equipment list is definitely premium grade, with the sunroof and amazing stereo standing out as highlights. Other variants in the range are competitively priced too, with the 200S starting from $46,990 (before on-roads) and the cheapest way into the twin-turbo V6-powered Stinger- the 330S beginning just a whisker under $50K at $49,990. 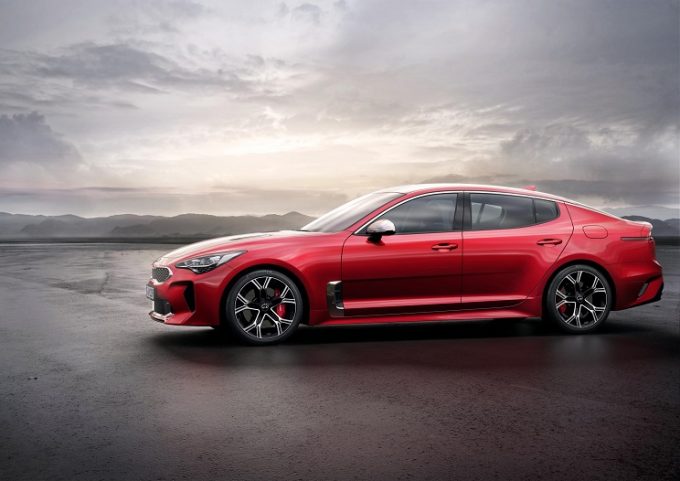 Consistent sales numbers are proof positive that a steady number of people are ready to plonk down serious money for a Kia.  The Stinger broke the glass ceiling and shattered any lingering cheap and cheerful perceptions of the brand.

As an image leader for the brand, you can tell serious effort went into every facet of its development. It handles and stops well, has jaw-dropping acceleration, a whopper of a stereo and is chock full of standard equipment.

With no direct competition, the Stinger is now in a league of its own, standing out as something truly special and different in the market.
Some quarters of the motoring media doubt that there will be a successor after this generation, which if true, would be a major shame to us.