With the Holden SS Ute and HSV Maloo on the way out, performance utes are an endangered species. In the USA, similar vehicles such as the Dodge Ram SRT10 and Ford F-150 Lightning went out of production early last decade to make way for off-roaders like the F-150 Raptor. 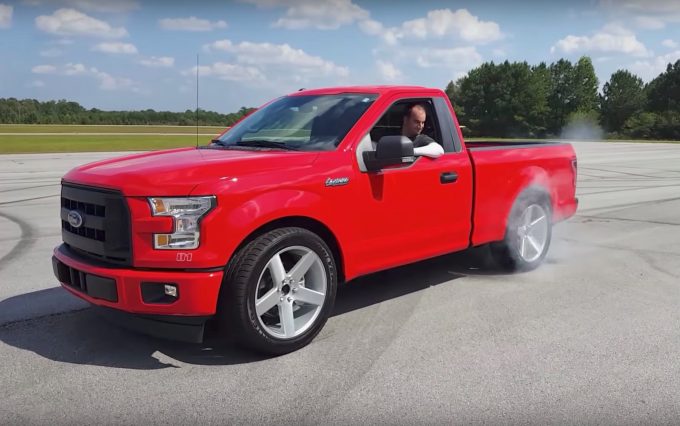 Well, Pioneer Ford of Georgia wasn’t gonna wait around for Ford Performance to build a new Lightning, so they built their own 2018 Ford F-150 Lightning.

They added a Roush supercharger to the 5.0-litre V8 single-cab F-150, raising power to 650 ponies (484kW). Suspension is lower, firmer and sportier to get more of that glorious grunt to the road.

The five-spoke wheels, side-exit exhaust and ‘Lightning’ badges and decals hark back to the last Lightning Ford made, which ended produciton in 2004. It was based on the tenth-generation F-150 and generated 280kW thanks to a supercharged 5.4-litre intercooled V8.

This 2018 version sports a six-speed automatic gearbox, but a version based on the facelifted F-150 will sport a ten-speed automatic and the revised V8 engine, with multi-point and direct injection. As the single-cab F-150 doesn’t have a colour touch-screen for Ford’s SYNC 3 system, the updated version will.

Check out the video below to watch the 2018 Ford F-150 Lightning dealer special destroy an airstrip, and presumably a big chunky of the rear tyres.