In the world of inline sixes, BMWs are among some of the greatest the world has ever seen. Lightweight, rev-happy and usually canted at an angle, the Bavarian donks are also renowned for their tuneful symphony from the exhaust. Courtesy of Engine Swap Depot, here is a BMW E39 5 series with a Nissan TB48DE inline six. 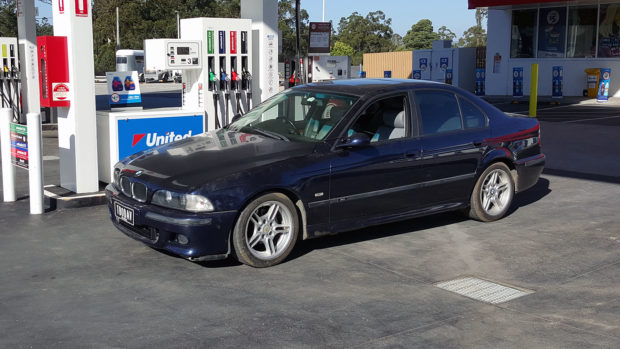 A member of Bimmer Forums, Thorpatrol has fitted to his E39 5 Series an inline-six from the other end of the spectrum; the stout Nissan TB48DE 4.8-litre unit from the Y61 Nissan Patrol, with a massive turbo on the side. Stock, these make 185kW and 420Nm, but are very popular among tuners, particularly in the Middle East where Patrols of several thousand horsepower lurk the streets.

Based in Melbourne, this particular unit has been treated to JE forged pistons, PPM H-beam conrods, dry sump lubrication system, 1.5mm oversize valves by Supertech sitting in beryllium copper valve seats, manganese bronze valve guides, plus more aggressive camshafts (as can be heard from the idle in the videos below) and 2200cc injectors. A very large turbocharger sits alongside the straight six. This is all fed through a Ford 6R80 six-speed auto, as seen in the Territory TDCi and Ranger automatic, and a Nissan R230 differential.

No power figures are confirmed, but with the full rebuild of the engine we would expect some very intimidating numbers indeed. We can’t wait to see more of this vehicle in the future.