Not sure if you want a new Maserati Gran Turismo or a sports trike? Why not have both with the 2017 Lazareth Wazuma V8M. 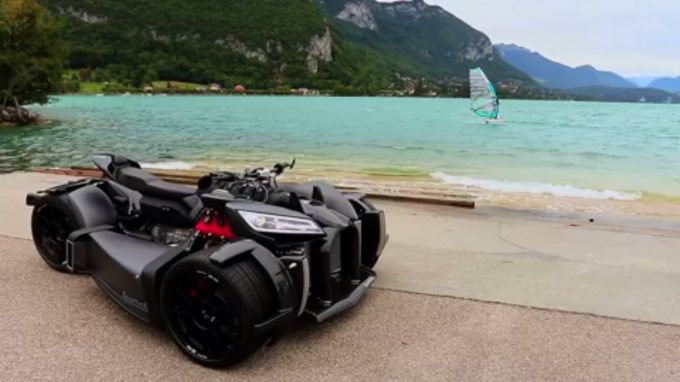 French company Lazareth has a history of building trikes around exotic Italian powerplants, including a 3.0-litre Ferrari V8. Although it is dubbed a trike, there are four wheels, two of which are placed closely together at the rear, in an effort to get power to the road that normally propels a 1.7-tonne grand tourer.

The 4.7-litre V8 develops 343kW and 520Nm through an automatic gearbox, while the carbon fibre chassis is built around the large engine. Lashings of leather and Alcantara surround the bits that the rider comes into contact with.

To get the same driveline in an Australian-delivered vehicle, one would have to spend $295,000 on the Maserati Gran Turismo Sportline, which has a fuel consumption rating of 15.5L/100km. Newer Maserati vehicles have switched to a 3.0-litre twin-turbo V6, or 3.8-litre twin-turbo V8 which is considerably more efficient, delivering 10.7L/100km economy in the 1900kg Quattroporte GTS.

Other Lazareth vehicles include the Wazuma V12, with a 5.0-litre BMW V12 engine and the Wazuma GT. 10 will be made, and all are approved for European roads. Check out the video below to see the Wazuma V8M in action.