In the last decade, automotive safety has come leaps and bounds, with the majority of new cars on sale receiving five-star crash ratings across the board and new regulations that have seen widespread adoption of autonomous emergency braking and semi-autonomous features. While the latter might not have spread across the used car market, a recent study by Monash University has listed the safest used cars available, based on structural analysis of over seven million crashes and driver injuries.

The list can be read here and you’ll be surprised at how many dismal one star efforts you should avoid if you care about your family. Here, in no particular order are the Top 10 safest used cars on sale in Australia.

When it launched in 2008, the Ford FG Falcon was the first Australian designed and built vehicle to achieve a full five-star ANCAP rating, thanks to a crash structure that was developed in Volvo’s crash lab in Gothenburg, Sweden. The adoption of curtain and side airbags as standard on the sedan, dynamic stability control and seatbelt reminders contributed to this impressive rating. The abundance of FG and FG X Falcons on the used car market makes for smart buying if safety is a main consideration. VE Series II and VF Holden Commodores are also worthy of consideration if this is your main priority.

Then Germans seem to have an edge for developing strong, safe bodies as they were, for a long time, at the cutting edge of automotive research and don’t have to worry about cost constraints like mainstream manufacturers. The Chris Bangle-styled E60 5 Series of 2003-2010 has aged gracefully, with its polarising styling taking some time to become appreciated. As the BMW was ahead of the curve with safety features, it compares favourably with most cars of similar vintage.

A pioneer in its day, the W211 is known not only as the Men In Black II car, but a five-star Euro NCAP performer with excellent ratings for the US NHTSA crash test too. It debuted new suspension and electronic chassis aids including sensotronic brake control. Not only has the styling aged very well – especially in wagon form but it performs better safety-wise than many of its contemporaries.

The predecessor to today’s Tucson switched to an alpha-numeric name strategy like the i30 and i45 of the time. Well built and with a high level of customer satisfaction, you could probably even find one within warranty if you look hard enough.

The switch from the Rodeo nameplate to Colorado brought some changes including ABS brakes with EBD, three-point rear belt and hazard lights that switch on during an accident. While not performing particularly well, a three star crash rating is as good as it was at the time and Monash’s data has shown Colorado drivers seemed to fare better than rivals. Please be aware that while the current batch of pick-ups sets the standard with five-star ANCAP ratings, being the best of a bad bunch at this time is nothing to crow about. 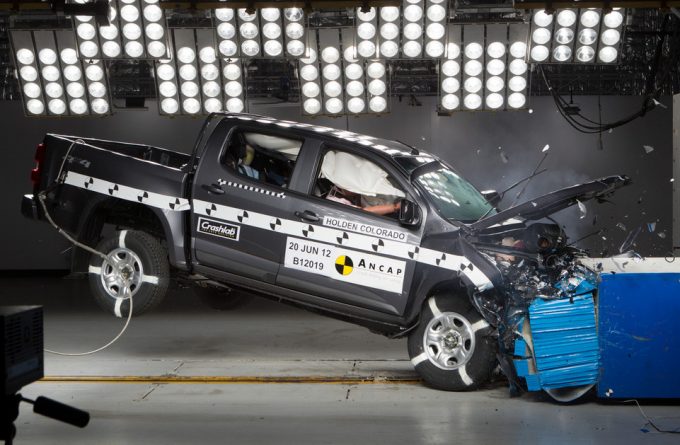 The light car class is full of shockers, as it is only in the last 10 years or so that mandatory safety regulations have made them as safe as they are today. The Honda City sedan is on the outlier in terms of its safety rating, soundly beating all other cars at the time, including its Jazz sister.

Being one of the first Australian cars with DSC and curtain airbags established the Territory as a safety leader in its class, one of many attributes that saw it become a best-seller for a long time in its segment. The Territory initially managed a four-star ANCAP rating, before several upgrades resulted in a bump up to five stars in 2010. Aside from ball joint issues in early 2004-2006 models, the Territory’s Falcon genes give it the making of a reliable family cruiser.

Volvo is inextricably linked with automotive safety, so you’d expect them to have the jump on other car makers. This real-world study confirms this. The V70 of two generations ago, starting in 2000 has a safety advantage that predates every German prestige car listed, let alone Australian and Asian cars. Given the S60 shares most of its genes, one would expect similar safety brilliance.

Proof that despite widespread perception, the maligned Jaguar X-Type was much more than a Ford Mondeo in cat’s clothing, the X-Type is a surprise entry in this list, obviously suggesting that Jaguar’s engineers put much effort into making sure this vehicle was a safety leader in its class, beating out the competition at the time.

Mitsu’s midsize SUV effort heralded some bold and handsome styling at the time, a pumping Rockford Fosgate sound system, clever fold-down tailgate and a surprisngly gutsy V6 engine. It’s also, as it turns out, a safe choice for used car buyers with a five-star rating in the Monash report. It’s worth noting that the 03-06 generation has four stars.