The subject of whether or not flying cars will become a commercial reality has been fiercely fought, agreed-upon and denied for decade after decade, but recent technological developments mean the denialists might not be able to keep up the jig for much longer.

Notable flying cars include Chitty Chitty Bang Bang, the family car from The Jetsons and many sci-fi classics such as The Fifth Element. With recent advances in drone and computer tech, many automotive, ride-sharing and upstarts are spending billions of dollars in earnest developing flying cars. Here are ten examples of what only a decade ago seemed unfathomable. 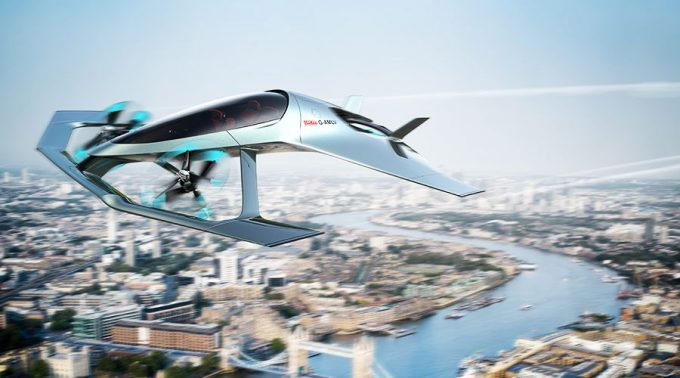 This handsome design was designed in conjunction with Cranfield University, Cranfield Aerospace Solutions and Rolls-Royce plc.

“The Volante Vision Concept will enable us to travel further with our hourly commute, meaning we are able to live further away from where we work. Cities will grow, and towns that are today too far away from cities to be commutable will become suburban.”

With the Pop.Up Next concept shown at the Geneva Motor Show earlier this year, Audi took things in an unexpected direction: up. A collaboration with Airbus combines a city EV with a detachable passenger compartment that can be hooked up to a passenger drone. To show this is now just a pie-in-the-sky idea, a letter of intent to start testing at Audi’s spiritual home of Ingolstadt, Germany has already been signed.

Uber hopes to have its flying car service available to all by 2023, with sleek prototypes already made for the popular ride-hailing company.

Founded in 2014, China’s Ehang company philosophy is ‘Let Humankind Fly Freely Like a Bird.’ Prototypes are well advanced as the company hopes to hit commercialisation as soon as the next decade.

With a top speed of 322km/h and a rang eof 805km, the Terrafugia TF-X seats for and features a VTOL function. Recently, the Terrafguia company was purchased by Geely, who also owns Volvo, Polestar, Lotus and Proton. With big money behind it, its plans of coming to fruition should be taken more seriously.

The Volocopter 2X hales from Germany, and is an electric helicopter with several electric rotors arranged in a circular orientation.

This indepdently-designed concept floats the idea of magnetic levitation one day becoming a reality for human motor vehicles. Now currently the domain of high speed trains, the technology may well replace the humble wheel in a few decades’ time.

This is quite an old idea now, but still one we think is pretty cool- a floating pod that can be operated from the cabin.

This one is more car-like than the others and definitely one of the stranger ones. What do you think of it? Let us know in the comments below!

And, of course you could rightfully expect Toyota to be hedging its bets on this one too. Toyota hopes to have this model ready by the Tokyo 2020 Olympics, at least for demonstration purposes