Subaru has teased its forthcoming Viziv Concept Tourer ahead of the 2018 Geneva Motor Show beginning on March 8. 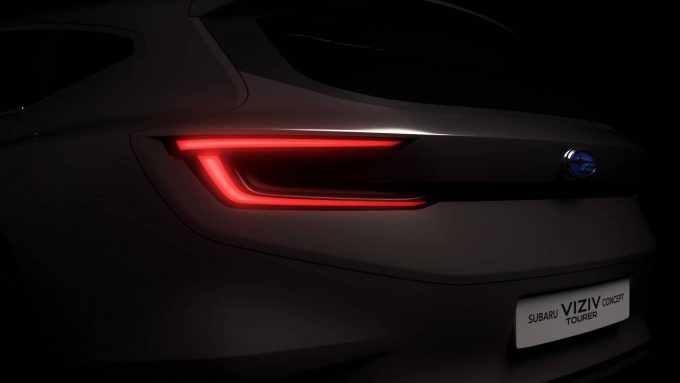 The first picture shows a shadowy rear end shot. It is unclear if this concept is previewing the next-generation Forester or next-generation Levorg, as it appears to have many SUV styling elements but also appears wide and sleek.

C-shaped LED taillamps sit across a clamshell boot opening, evoking premium vehicles such as the Audi Q5 and Lincoln Nautilus not available here. A strong shoulder line is also evident, with a long rear window indicating the next Forester could feature a 7 seater variant like many of its rivals now do. Speaking of rivals, you can see what is on the horizon in the midsize SUV segment here.

Subaru has used Viziv concepts as a prelude to several cars, including the current Impreza and XV. The 2017 Viziv Performance Concept gives plenty of clues to the upcoming WRX as discussed in our Top 10 Sports Cars coming soon feature.

The next Forester will no doubt be powered by a 1.6-litre turbocharged boxer four-cylinder, as seen in the recently introduced entry-level version of the Levorg. Updated verisons of Subary’s EyeSight technology as well as improved interiors are guaranteed to feature, as part of the shift to the Subaru Global Architecture.

We’ll have full details on March 6, as well as many other cars scheduled to debut at the 2018 Geneva Motor Show.