In a shock discovery, a spy photo has emerged of a mysterious prototype testing at Holden’s Lang Lang Proving Ground. 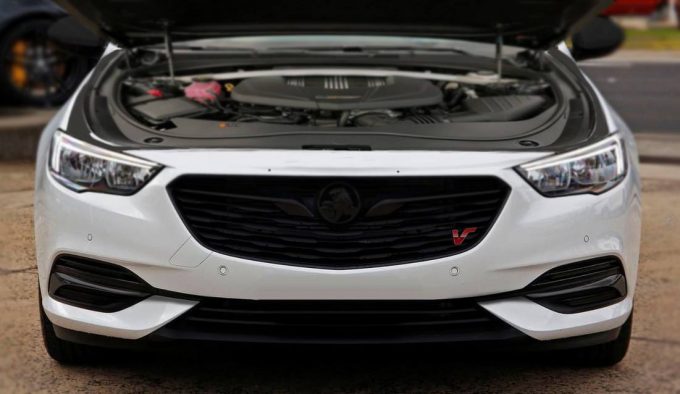 The vehicle in question is a ZB Commodore, but with what appears to be the Cadillac CT6 V-Sport’s 4.2-litre twin-turbo V8, and here’s the kicker- it’s arranged north-south. This discovery suggests a modified version of the D2XX to accommodate rear-wheel drive is under development, possibly utilising components from the Alpha platform which underpins the Cadillac ATS and Cheverolet Camaro. Holden engineers have strenuously maintained that even a forced-induction motor cannot fit under the car’s hood, so this would be an extensive re-engineering exercise.

The presence of this vehicle clearly shows that Holden -which has gone on record admitting it underestimated the backlash- is taking criticism and the loss of devout V8 fans to heart and is looking for a solution. It also explains why myriad Cadillac vehicles have been spotted testing around Victoria lately. Holden and GM have obviously gone to great lengths to keep this prototype under wraps, so details are scant, including where such a car would be produced. Since it would not satisfy European demand, the Russelsheim, Germany factory where other ZB models are sourced is a no-no. Likely possibilities where the modifications take place include HSV’s Clayton headquarters, or a U.S. Factory that already manufactures Alpha-based vehicles. This appears to be a production-ready vehicle, even sporting V badges.

If this comes to fruition, it will be one of very few cars that has been produced in front-wheel drive layouts as well as rear-wheel drive. Notable examples include the MG ZT, which was available with a Rover K-Series V6 and front-wheel drive, or the Ford Mustang’s 4.6-litre V8 and rear-wheel drive drivetrain. Could this signal the return of the Commodore SS? Stay tuned for more on this juicy development and remember this date, when history was made.

NB: Did you fall for our April Fools’ prank? Tell us in the comments below.
Image credit: Naish Chapman