A new Volkswagen small SUV is on the way and it has been previewed with new artwork and videos. 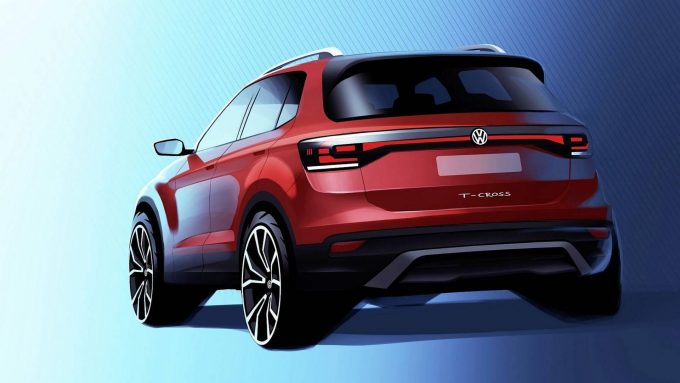 You might be wondering why the T-Cross is needed, since Volkswagen already has a small SUV which it doesn’t sell her- the T-Roc. Well as you might have noticed, manufacturers are filling every single SUV niche, including ones we didn’t even think existed. There are now small SUVs from the same manufacturer but fulfilling a different role. For example, the Nissan Qashqai and Juke are in the small SUV category, but one is sporty and distinctive, while the other is more conventional and family-oriented.

It’s a similar story with the T-Roc and T-Cross. The T-Cross will measure 4107mm in length, which is 71mm less than the rakish T-Roc. Being a size down, it will share its MQB ‘A0’ platform with the VW Polo and Seat Arona. This probably means the T-Cross will get a choice of turbocharged three-cylinder and naturally aspirated four-cylinder engines, including a 1.0-litre turbo triple and an atmo 1.5-litre.

Whether or not it comes to Australia is another matter entirely. The T-Roc has been shelved for the time being, as the European factory simply doesn’t have enough capacity to keep up with explosive demand, let alone cater for other markets at the moment. The rear end teaser sketch shows a mini-Tiguan appearance, but with a four-window side profile, rather than six. The pinched beltline is prominent, as is the lower stamping across the doors and prononced wheelarches. An LED light element spans the width of the tailgate, bookended by C-shaped LEDs. We will bring you more when the car is fully revealed, including whether or not it gets an Australian stamp on its passport. In the mean time, check out the video below.