Since its introduction into the Australian market in 1966, Toyota has sold more Corollas than there are people currently living in Adelaide. Now in its 12th-generation, the Corolla has always been a bit of a fan favourite for those making a rational choice of car, but Toyota is now attempting to convert some buyers that might think it’s become a little bit boring with a bold new exterior, new architecture underneath and, of course, adding their hybrid technology for stupendous fuel economy. The question is: has it worked?

Corollas are synonymous with a few traits, namely economy and practicality. One of our first impressions sitting in the cabin is that the rear of the car seems to be cramped, and the boot space is lacking, due to the accommodation of the battery pack for the hybrid system. It will eat up five average-sized humans, but if you’re tall and stuck in the rear of the cabin, you might feel somewhat claustrophobic from the roofline, although rear leg room is impressive considering its size.

Up front however, it’s a near faultless presentation of how to package the interior of a compact car. The imposing dash might seem obtrusive at first, but the way it’s packaged together, it certainly won’t impede the legroom of taller occupants. One major drawback in terms of the practicality here is the bootspace, or lack thereof. Thanks to that 6.5Ah nickel-metal hydride battery pack hogging up a bulk of the space, there’s 217L of space, enough to swallow up a trip to the supermarket, but not offering enough to pick up a few friends from the airport. 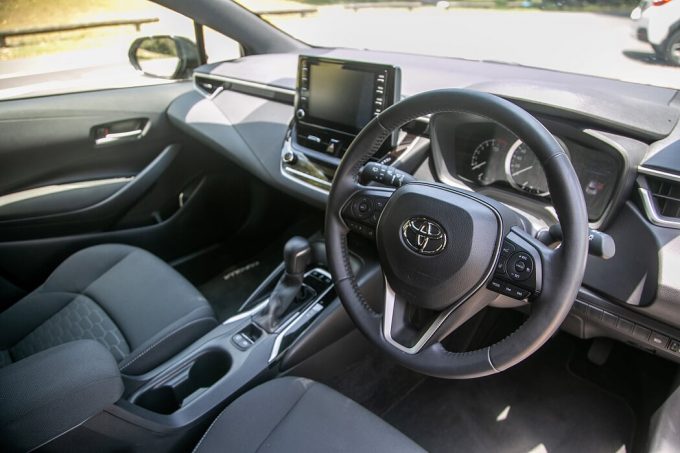 All Corollas are equipped with an 8.0-inch touchscreen media system, however buyers looking for Apple CarPlay or Android Auto will have to look to other offerings. The SX variant adds DAB digital radio, a navigation system with live traffic updates and a wireless phone charger. Toyota’s infotainment system is easy to use, albeit a little complicated, but thankfully there’s physical buttons surrounding the screen to ease the confusion.

The driving position feels as though it’s been carefully curated by Toyota, and the premium steering wheel (standard on the SX) feels nice and chunky in your hands, wrapped in pleather for a quality tactile feel. 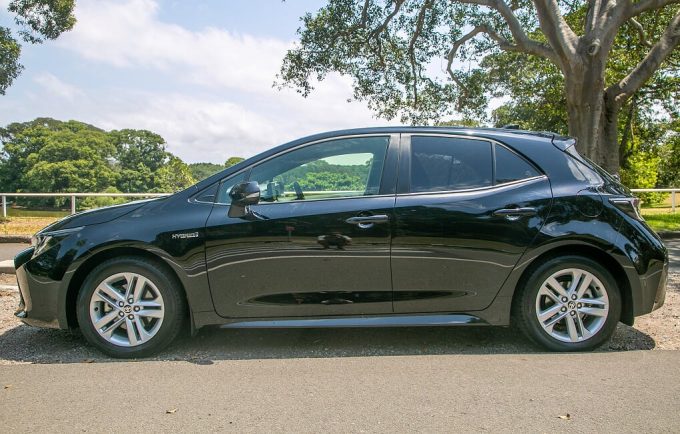 Beauty is in the eye of the beholder, so we’ll let you make your call in terms of whether the Corolla is a looker, but you can’t deny that it’s a modern offering that clearly draws a line in the sand between it and its predecessor.

What we will add here is that there is a drawback to that new design: visibility out the side and the rear has been impeded by the bulky B and C-pillars. The sloping roof design has given birth to a raft of blind spots for the driver, which is surprising considering Toyota’s experience making city-slicking hatchbacks. 16-inch alloys and full-LED headlights come as standard on the SX. 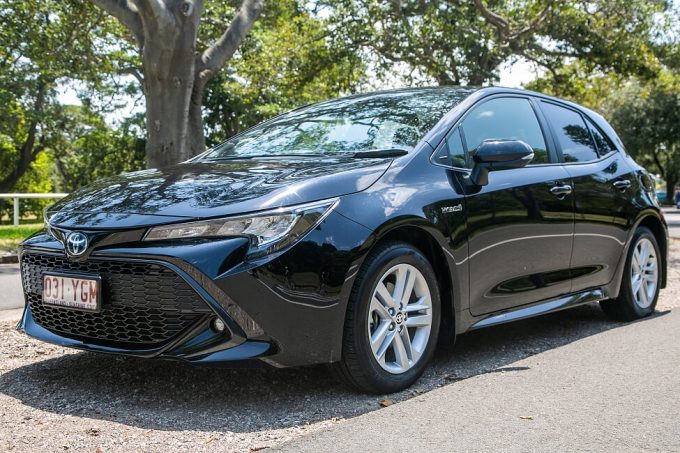 There’s not too much to report in terms of performance here, considering that’s simply not what the Corolla is built for, however you might be surprised with the torquey delivery of power down low, particularly in the ‘power’ mode. Eco-mode turns the throttle pedal into an economical spongecake, needing some encouragement to pick up speed with any urgency, but if you’re not in a hurry to get home, you’ll be rewarded when you do pull up in the driveway with a sub-5L/100km economy figure.

CVT transmissions are commonplace in this market segment, and in that respect, it does the job in the Corolla. It doesn’t offer too much in terms of adding to the driving experience, but does allow for a smooth transition between EV mode, and the internal combustion engine firing up to either add power to the wheels, or generate charge for the battery pack. 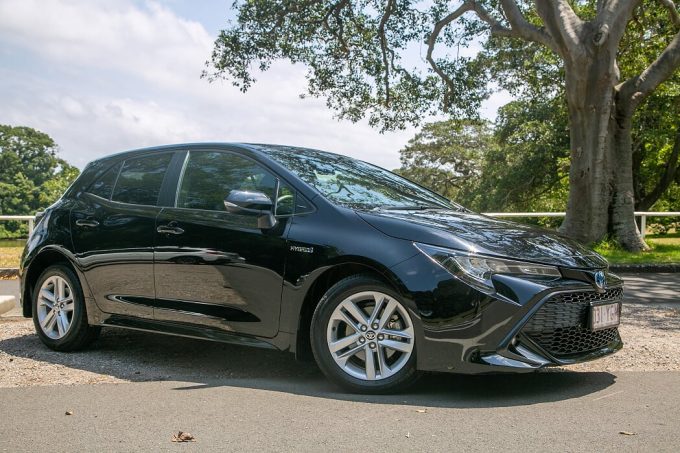 As we mentioned earlier, there have been some welcome improvements to the Corolla’s abilities, due to its underpinnings based on Toyota’s new global architecture, or TNGA in marketing jargon, which it shares with the C-HR and Prius. It also sits lower, so its personality has transformed to enjoy zipping around a bend, giving the driver significantly more enjoyment than was offered before. Of course, it’s by no means a driver’s car, but there is a responsiveness from the steering, with a nicely dampened ride on offer. Traditionally there wouldn’t be too much to report in this section for a Corolla, but we can say that that the new underpinnings have worked a treat.

As we’ve mentioned, the new architecture has worked wonders to the Corolla’s driving ability, and it feels exactly as it should around the city. The ride could be described on the firm side, but is by no means harsh. It rides over bumps without transmitting too much violence into the cabin. One problem that rears its head on driveways and in car parks is that with those changes to its dimensions, you do find yourself scraping that front splitter on a sharpish incline. There is a moderate amount of road noise from the tyres, but overall the cabin has been nicely insulated from the outside world, and offers a quiet, comfortable drive home. 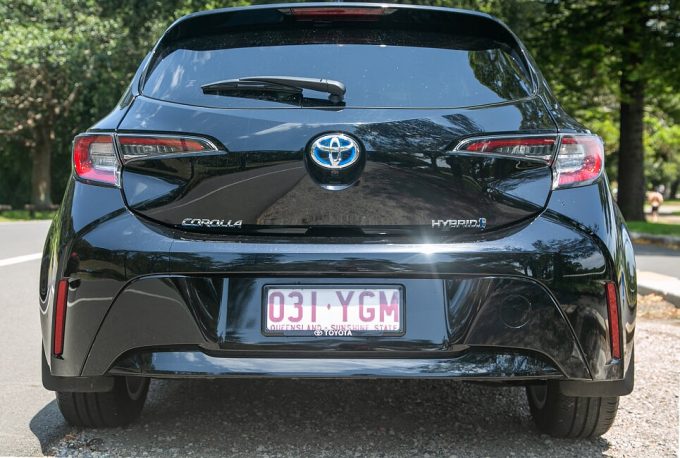 This is one area that – considering Toyota’s 22-years of experience with petrol-electric hybrid powertrains – the Corolla no excuse not to excel; and it doesn’t disappoint. Toyota claims a combined cycle of 4.2L/100km, which we weren’t able to match, but we didn’t come far from that figure. On a very average work commute, we found ourselves averaging 4.5L/100km, which is no doubt this car’s strongest selling point.

Something to consider in this regard is the fact that Toyota is lagging behind its competitors in terms of its a 3-year/100k warranty, however the servicing schedule has increased from 6-month/10k to 12-month/15k; prices have risen with this change from $140 for a standard service, to $175.

This is one area that Toyota has attempted to justify the price hike, adding a bundle of safety equipment as standard on the SX variant. Autonomous emergency braking, pedestrian and cyclist monitoring, adaptive cruise control, lane-keep assist, speed sign recognition and Toyota’s Link app all come as standard. Parking sensors are lacking, but there’s a rear-view camera to help you in and out of tight spots. 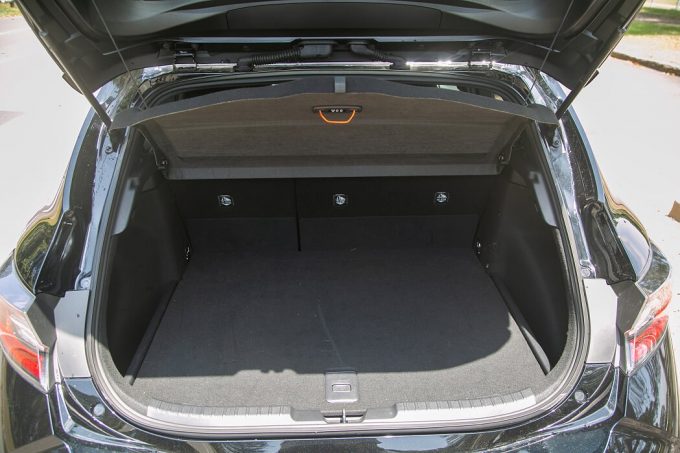 In terms of the line-up, Toyota has cut the number of variants down to three, with our test car the SX sandwiched between the entry-level Ascent Sport, and range-topping ZR variant. Coming in at $28,370 (before on-roads)

Some cars out there are pricey, and don’t offer enough to justify the price tag. This Corolla variant may be getting a little up there – for a Corolla – but it does throw the buyer enough bones for your $30,000 (factoring in on-road costs), considering the added safety gear, standard equipment and overall finish, you won’t be feeling too short-changed. However, for more the more knowledgeable buyers out there, this might be an area you see competitors catching up to the Corolla.

This little Corolla sparked some polarising discussion in the Top10 office, but the consensus we came to is that the Corolla is excelling in some areas, while failing to meet the standard in areas that it was previously the benchmark. In terms of a practical offering, the Corolla has things sewn-up.

It’s certainly more than just a refresh. And to be completely honest, the knits that we’ve been able to pick are relatively small problems, and may not blip on the radar or a prospective buyer; with the exception of its practicality.

To wrap it all up, there’s three hybrids in the Corolla line up: one for each of the variants, so for those looking to spend less than $30,000 on a Corolla, the entry level Ascent Sport might be the tick, or if you’re looking for a slightly more premium offering, with some added space, the top of the line ZR variant could be for you. More discerning buyers might be looking at some of its competitors, but all up, the SX represents a step up from Toyota in terms of a somewhat premium offering, with exceptional economy and a fun ride for those looking to zip around the city in style.