Year after year of sales success has seen the Mazda3 become a common sight on Australian roads and a default small car choice for many.

The successful formula of combining premium styling with sporty flavour has struck a chord with shoppers– especially when combined with the running costs and reliability typically associated with Japanese cars.

Now in its fourth generation, the newest Mazda3 brings forth some bold ideas to move the whole segment forward. We borrowed the thoroughly re-engineered G20 Evolve to see whether Mazda has succeeded in this department.

The new car is bigger than before, but with more sporting proportions. A wheelbase of 2725mm is one of the longest in the class, which bodes well for rear seat accommodation.

The tapering roofline and rising window line could result in a “hemmed-in” feeling for the especially tall, but thanks to the new interior layout, internal space is maximised.

This is despite the fact the cab-rearward character is maintained. We suspect visibility, however, would be better in the sedan.

Thanks to the low, sporty driving position and neat new horizontal dash layout, the cabin feels modern and airy. Other highlights include arm rests, into which arms fall to place better than most of its contemporaries

At 295 litres, boot capacity is some 13L less than the outgoing model– a consequence of the more exotic proportions, but the seats are split-fold to free up more room. If boot space is a priority, you could always go for the sedan, which has 444L.

A horizontal 8.8-inch screen takes pride of place next to a new, digital instrument cluster. As before, it is controlled by the MZD Connect rotary dial. Mazda may have been a bit late to the party with Apple CarPlay and Android Auto, but it is well integrated with their proprietary infotainment system.

With awesome materials, build quality which genuinely suggests it belongs in a class above and a sharp new design, the Mazda3 has arguably the freshest interior in its calss. There is also a subtle refinement to things like the precision of the wiper washer jet and feel of the switchgear. The head up display (HUD) is unexpected on a lower-tier model and most welcome indeed.

The door-mounted wing mirrors may be more aerodynamic, but can take some familiarisation to those who are used to mirrors mounted at the leading edge of the driver’s window. 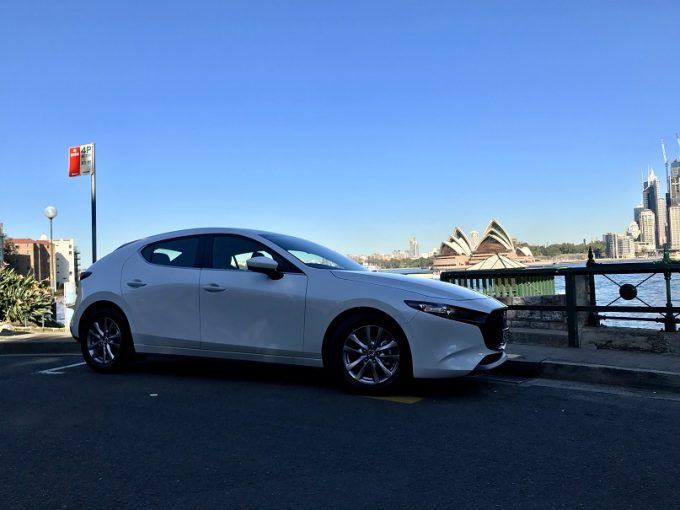 Previewed by the Kai concept, the new car sports a sleeker and wider expression of Mazda’s successful ‘Kodo’ design philosophy and represents Mazda’s desire to shift upmarket. The side panels feature subtle scalloping and clean surface treatment. The swoopy style of the hatch might not be to all tastes, but the more formal sedan manages to look fresh and sophisticated as well.

The interior design is a welcome departure from the traditional layout sweeping most small cars. It creates a feeling of premium spaciousness, even if the black colour theme might not be everyone’s cup of tea. 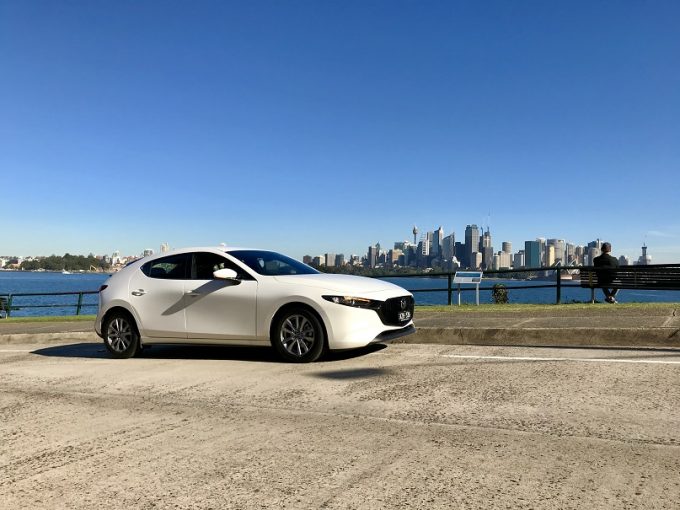 For those who desire more poke, the 2.5-litre Skyactiv-G donk further up the range generates 139kW and 252Nm. Later in the year, Mazda’s revolutionary new Skyactiv-X will lob with 132kW and 224Nm from just 2.0-litres. It uses sparkless ignition for diesel-beating fuel economy. 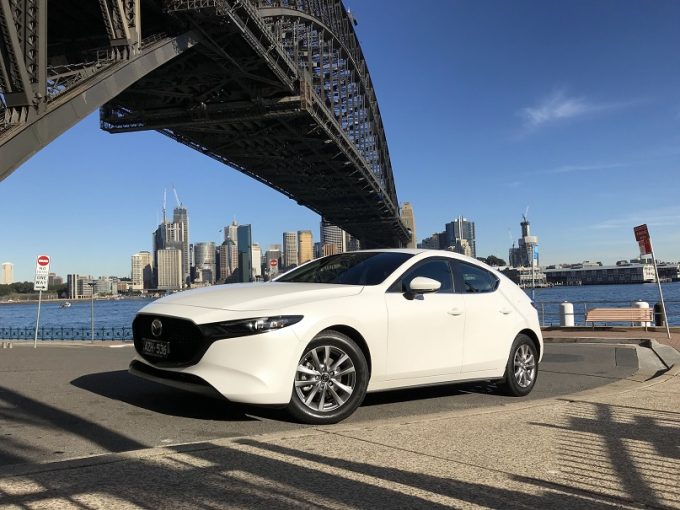 The six-peed automatic in our test car was intuitive and intelligent, knowing which gear to be in regardless of road conditions. It helps that it is tied to such a sparkling engine, but we are glad it is not a CVT or dual-clutch item. While there are no flappy paddles in this one, it features a ‘Sport’ mode switch and sequential +/- shifting, pushing forward for downshifts and pulling backwards for upshifts.

A six-speed manual can be had for $1000 less, which would no doubt possess the delightful shift action we’ve come to expect from all Mazdas.

Helping smooth progress is the latest in Mazda’s G-Vectoring system, which keeps the car poised through the corners using yaw sensors and the car’s brakes.

Despite the switch from multi-link independent rear suspension to a torsion beam layout, you don’t get the impression Mazda has downgraded in this department.

It would be interesting to compare this vehicle to the upcoming BMW 1 Series for handling, as Mazda has set a new benchmark with this car.

Considerable work has been done to elminiate noise paths, which has paid off. The Mazda3 used to be one of the noisier cars in its segment, now it is near the top for noise vibration and harshness (NVH).Acoustic glass,a sound-absorbing headliner and thicker floor mats are just some of the reasons why for the new car’s transformation.

It feels bank vault solid and a comfy, cossetting place to travel long distances in for all outboard occupants.

Thanks to a 78 per cent stiffer chassis, a sporting drive does not come at the expense of ride quality, with a well-damped but gentle ride.

You might be wondering why the new vehicle bucks the trend of cars becoming thrifiter, with a 6.2L/100km rating versus 5.8 of the old Mazda3 Neo. This is because the new car was tested uner the Worldwide Harmonised Light Vehicle Testing Procedure (WLTP) regime, designed to more accurately reflect real-world conditions- an area in which Mazda generally excelled anyhow.

This car also features stop-start, with a button to switch it off located to the right of the steering wheel.

The manual version consumes marginally more at 6.3L/100km, with only very modest increases for the 2.5-litre engined models. The big news for fuel consumption will be the eagerly-awaited Skyactiv-X at the end of the year.

The Mazda3 recently secured a five star ANCAP rating, which is to be expected considering the aforementioned increase in body stiffness. You can read a full report here.

The real story, however, is the sheer array of well-integrated active features in the vehicle’s tech arsenal. Autonomous emergency braking is one thing, but to have it integrated into the rear-cross traffic alert system, we discovered how useful it is firsthand when reversing out of a blind driveway—the car detected an ‘invisible’ pedestrian long before it came into our view. Just as well considering the thickness of the C-pillars. 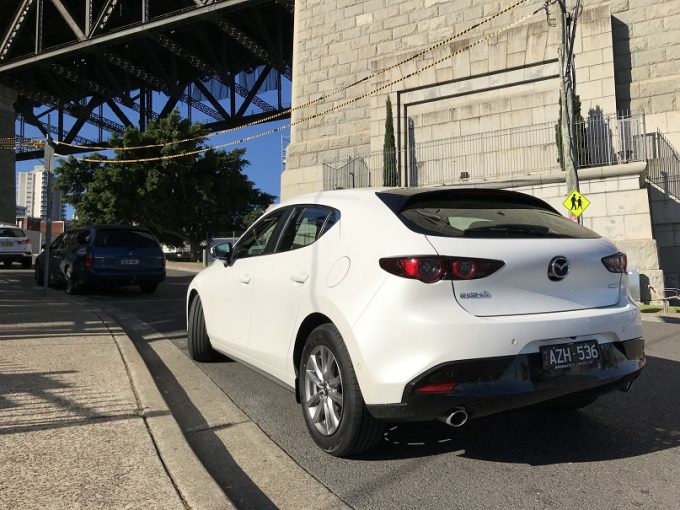 As the fourth-gen Mazda3 has moved into premium space, it’s not a $19,990 proposition, but starts in the mid-20s. If sales figures are any indication, this has not put off buyers, with an only mild decline of 12.4 per cent to the end of July 2019 (VFACTS) against an entire segment which is down by 17.9 per cent. The car still consistently finds its way onto top 10 best sellers list month-in, month-out. 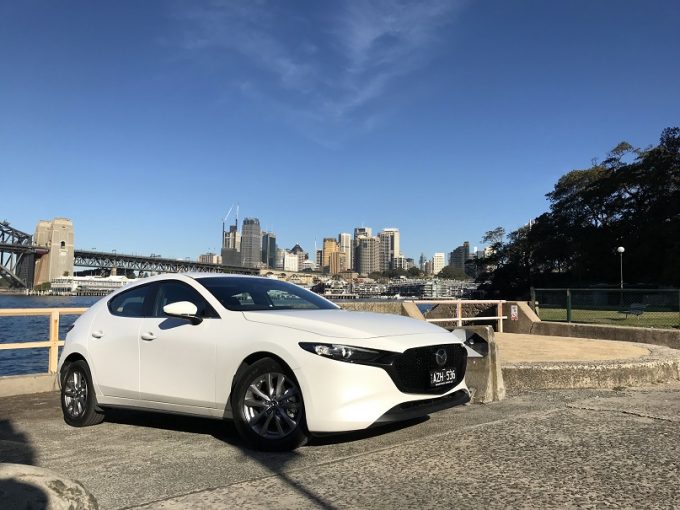 Not only is this car a considerable leap forward over its predecessor, but it moves the bar for the entire segment higher than ever. Best of all, it does this without resorting to downsized and turbocharged engines or CVT gearboxes. Driving dynamics, interior quality, refinement and style are better than ever before. If you’re looking at a new small car, this one definitely should be on your shortlist.