We have been given the best look yet at what the upcoming Lotus SUV could look like, with Naish Chapman‘s rendering made exclusively for Top10Cars. 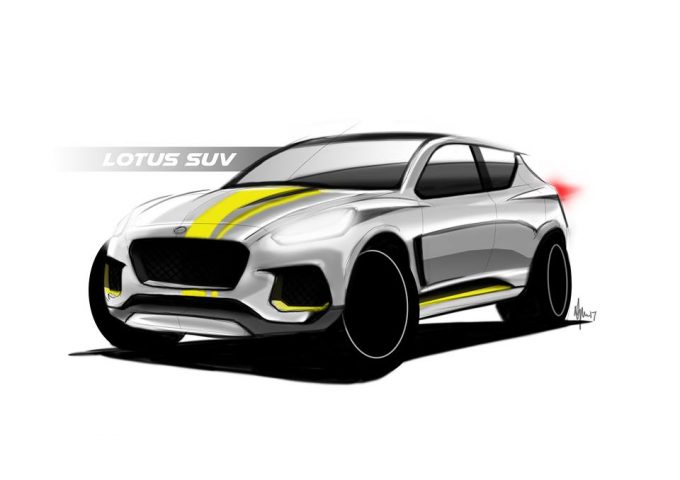 As we saw from the leaked images from China’s Patent Office (linked above), the SUV appears to be aimed at the Audi Q5 and Porsche Macan, with many cues from other Lotus production models. The front end has plenty in common with the current model Exige, with the rear end’s circular lights and black trim piece mirroring the Evora sports car.

Since the acquisition by Chinese company Geely earlier this year, new possibilities of platform and engine sharing have opened up to Lotus, so the new SUV could easily sit atop Volvo’s Compact Modular Architecture (CMA) or the Scalable Platform Architecture (SPA) shared with the XC40 and XC60, respectively. These predominantly steel platforms are a departure from the extruded aluminium tubs that Lotus presently uses.

Ever since the Norfolk, UK marque announced its intention to enter the SUV arena, a stated aim was to be significantly lighter than the competition. Numbers of 200kg less than the Porsche Macan have been mentioned, but it is unknown at this stage whether use of common platforms will help or hinder this goal.

Lotus presently uses Toyota-based engines, including a supercharged 1.8-litre in the Elise, and a supercharged version of the 2GR V6 in the Evora and Exige. It would be expected that Lotus would switch to Volvo’s engine family, which includes a turbocharged and supercharged 2.0-litre four-cylinder engine.

With Lotus’s sporting philosophy, one would expect the availability of a manual transmission and benchmark handling in the class. Lotus will no doubt also spread its handling expertise across Geely’s other brands including Polestar, Volvo and Proton.

Are you excited about the upcoming performance SUV from Lotus? Tell us what you think in the comment section below.