In its 20 years of existence, the Kia Rio has seldom been associated with the word ‘sporty’. The only exception to this may have been the faux WRX STI lookalike that appeared in the middle of last decade. While that was an interesting vehicle, it was just a cosmetic exercise and one that showed the company had a sense of humour.

Now in it’s fourth-generation, the Rio has morphed into something far more sophisticated and grown-up, to the point where a model with genuine sporting credentials can be taken seriously. Enter the 2019 Rio GT-line- a warmed over hatch packed with stand-out looks, attitude, safety features and a drivetrain that will make European competitors take notice.

Although the A-pillar was pushed back for more rearward proportions with this generation, the Rio still makes good use of interior space with 4070mm of length, 1725mm of width, 1450mm of height nad a 2580mm wheelbase. Visibility is excellent and there is a greater sense of width than you’d get with the Picanto form the next segment down. The partial-leather seats are of a quality material, feeling distinctly premium ( compared with the faux leather of the Picanto GT, anyway). The driving position is good, thanks to a steering wheel which is both height and reach adjustable.

The Rio GT-Line features Kia’s 7.0-inch touch screen infotainment system, which come standard with Apple CarPlay and Android Auto. The system works well, even when your phone is locked, not suffering the crashes and interruptions that you can experience with early phone mirroring systems. The audio system features six speakers, which isn’t going to win any awards for sound quality but will do the job adequately for those who like to blast their tunes.

As with all modern Kias, the placement of controls is outstanding, with everything where you’d expect it or falling readily to hand. Knobs for volume, tuning, intuitive steering wheel buttons and nothing out of reach for average drivers. 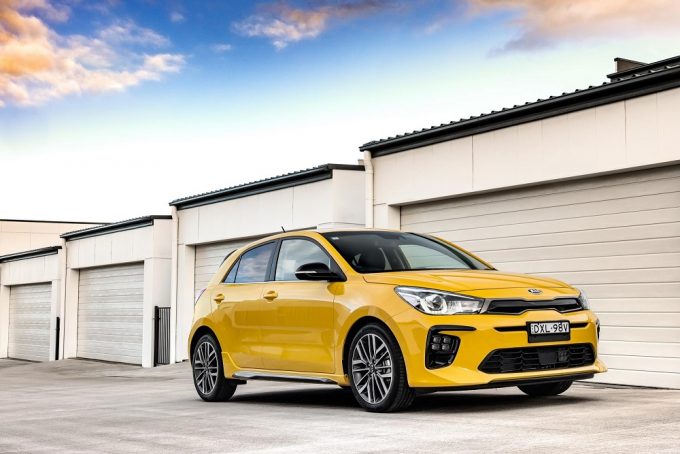 Especially in the $520 extra (for metallic) Mighty Yellow paint, the Rio GT-Line looks seriously sporty. This is helped by the ‘ice cube’ LED’s incorporated into the lower front openings, ‘Tigershark’ grille, machined alloys and subtle body kit. This is a car with plenty of showroom appeal, with four other colours available too.

Inside, a faux carbon fibre finish spreads across the dash, with aluminium highlights as well. Soft plastic is used for the dashtop and piano black for the gearbox surround. Other details we liked included the polished alloy effect on the pedals and steering wheel.

Utilising the same 1.0-litre turbocharged triple as the Picanto GT, but weighing 169kg more, you could be forgiven for expecting blunter performance, but thanks to a 7 speed dual clutch transmission (DCT), the Rio actually gets more of that power to the road. The results is a 0-100km/h time in the 9-second range, but there is a bit more nuance than that. One reason for this is the 88kW and 172Nm compared with the lower peaks of 74kW and 171Nm for the Picanto GT.

In open road conditions, the Rio does seem a bit hesitant, and almost CVT-like off the line. We suspect this is a self-preservation feature- it’s worth remembering this little car has a seven year warranty and roadside package. To really explore the drivetrain’s potential, try and overtaking maneuver and you will be surprised at how quickly it builds pace without running out of puff. This little car is eminently capable of cruising at speeds much higher than Australia’s legal limit- Italy’s 150km/h autostrada, for example, would be dispatched with ease.
The pleasant three-cylinder hum imbues the car with character, while the sophisticated gearbox makes the car feel altogether more mature.

A 7-speed dual clutch transmission is usually the domain of the Euros, so it was with great interest that we sampled Kia’s effort. While this type of gearbox has received a bad rap in the past for failures (cough, Ford, cough), this one seems conservatively calibrated and is backed by a very generous warranty.
The ratios are just perfect, with the car capable of 110km/h cruising at just 2100rpm. It’s quick to respond to manual inputs, with the hammer-shaped gear lever a fine consolation for the lack of paddle shifters.

While the shorter and nippier Picanto is surely the choice for those who love ducking-and-weaving through tiny gaps in Sydney’s traffic, the Rio is altogether more accomplished at the limit, inspiring more confidence thanks to its larger footprint. Grippy Continental tyres gave the car more bite on turn-in, while we even felt the back end tucking in a bit on lift off for smooth progress through the chicanes.

Steering feel is improved vastly over Kia’s recent efforts, with a well-damped and nicely weighted feel, consistent off centre and from lock-to-lock. While not exactly brimming with feedback and not quite best-in-class, it makes the Rio GT-Line a genuinely enjoyable car.

Refinement was another area that surprised us. The body of the Rio feels rigid, well-insulated from road noise and the aforementioned Continentals play a role in isolating rough road noise and feel. Wind noise is minimal and any engine noise that does filter through the cabin is that lovely three-cylinder note. If you don’t enjoy engine sounds, don’t worry it’s not obtrusive, even under strain from the right foot.

At 5.4L/100km, the GT-Line sips some 0.6L/100km less than the recently updated Rio S and Sport automatics, which were treated to a new six-speed gearbox themselves. Real world variation was minimal due to the seven tightly-packed gear ratios and generous torque curve between 1500 and 4000rpm. As with the smaller car, there is no requirement of premium unleaded, with the car happily slurping 91 octane. Stop-start also switches the car off when it comes to a stop, but this can be switched off as well.
There is a moderate premium for service costs over its naturally-aspirated brethren. The first scheduled service, for example costs a still inexpensive $285 to the 1.4-litre’s $248, with intervals for the GT-Line set at every10,000km rather than the 15,000km intervals of the 1.4.

Safety is one area where the Rio scores large, thanks to a five star ANCAP rating across the range. You can read a detailed safety report here. On top of the usual safety repetoire, the GT-Line has lane keep assist, which can help correct the car when it drifts out of its lane and autonomous emergency braking (AEB).

At $23,090 RRP, the Rio is entering a new price point which some may consider slightly cheeky. It is worth considering that Kia routinely runs drive away campaigns, such as the $21,990 for the driveaway when the model was introduced. It is pretty well equipped, but maybe lacks some ‘flagship’ features like keyless entry, climate control and radar cruise. While some rivals such as the Mazda2 GT offer heads up display and cool features like that, the Rio GT-Line counters with a superior drivetrain, warranty and noticeably more space.

The Rio GT-Line is a nice way to herald the facelifted Rio range, lifting it up into a more premium territory than before. It has a solid feel, is very comfortable and is very enjoyable to drive. While the cost of entry is a little higher than you might expect, this is countered by low running costs and generous standard equipment levels. In Mighty Yellow in particular, the car looks particularly sporty and attracts attention. Well worth a look, and has us pondering the prospect of an even hotter version. Come on, Kia, you know you want to!