For one reason or another, the public’s buying sentiment toward micro-hatches is fading, moving toward larger cars, even amalgamations of the two in the form of the latest batch of crossover SUVs based on hatchbacks. Our resounding question is: why? Is the current state of the hatchback in such disarray that the public would be better served in another car? Well, we took Kia’s Picanto X-Line for a spin to find out.

The Picanto locks its pint-sized horns with cars like the Mitsubishi Mirage, Toyota Yaris, Fiat 500 and the Suzuki Ignis in a very heated battle for king of the little guys. Currently, Kia is dominating sales in the segment, and is hoping to continue that dominance with yet another Picanto variant.

The X-Line (introduced early in the year as the AO Edition) that we’ve got our hands on is the higher riding variant, which comes in at $17,790 (before on-road costs), packed with equipment, and of course, Kia’s 7-year warranty. Let’s check out how it separates itself from the existing Picanto crowd, and stacks up against the competition. 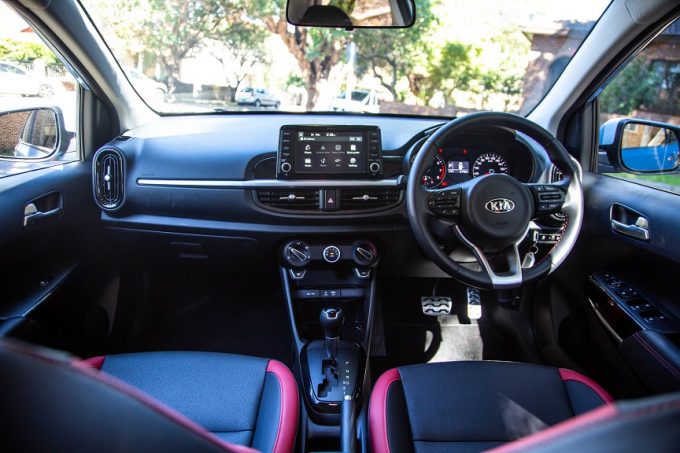 You can’t expect too much from a car measuring 3670mm long, 1625mm wide and 1500mm high, however, Kia has done a great job when it comes to making a compact car feel larger than it actually is. In the driver or passenger seat, the interior feels spacious, with great visibility all around the cabin. Those in the back will, of course, be cramped if they’re over the six-foot mark, but there’s no scraping of heads on the roof-liner or buckled knees behind the front seats.

Boot space, at 255L is larger than competitors like the Fiat 500 and Mitsubishi Mirage, largely thanks to the deep design that adds some extra literage. You can stash a moderate load of groceries, even bulkier items like prams in the boot without too much of a problem, but it is cramped in there.

They haven’t gone above and beyond in terms of flashiness inside, rather, they’ve consolidated what they do best, and have packaged everything in a neat and ergonomic fashion, with the infotainment system and premium steering wheel adding to a slightly more expensive aesthetic inside. 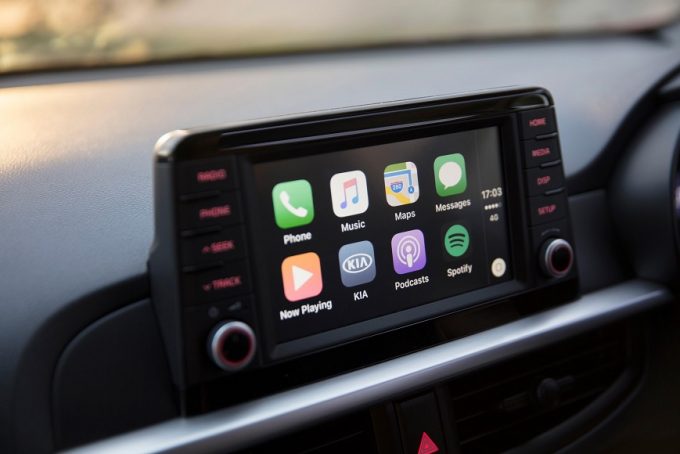 The Picanto excels when it comes to what’s lurking on the inside. It’s perfectly packaged, and won’t leave any buyers feeling shortchanged. It’s a practical offering with a number of stash spots for phones and keys, cubby holes and retractable cup holders to swallow up your belongings. The addition of Apple CarPlay and Android Auto is very welcomed, which loads up Kia’s 7-inch touchscreen infotainment system with all your essential apps and functions. The switchgear feels on point, and there’s nothing poking its head out inside the cabin that would suggest Kia has skimped massively in terms of the packaging of the interior. 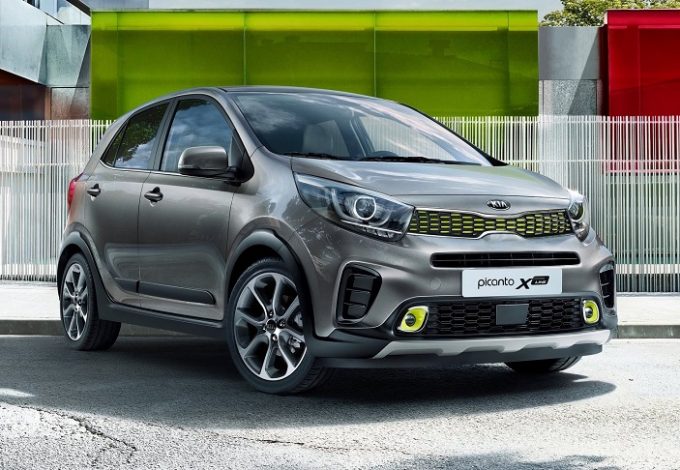 It’s a Picanto… with some added shiny bits, premium-looking LED headlamps, and a special paint job. Kia’s added some nice chrome and gloss contrasts around the body to spice up the exterior, as well as a set of 16-inch alloy wheels. Inside, 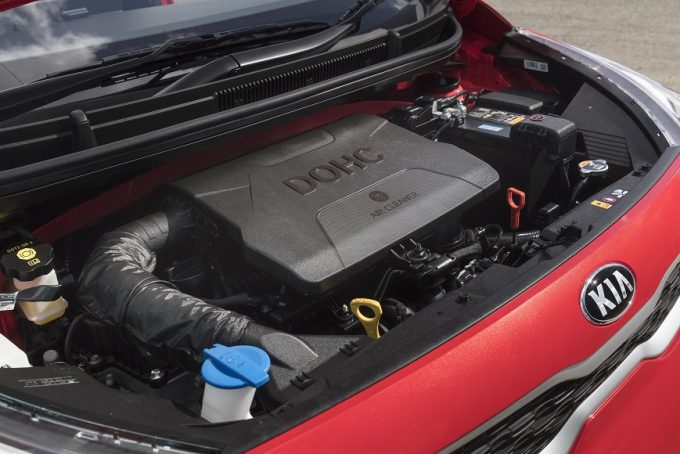 The Picanto X-Line is powered by a very unremarkable 1.2-litre four-cylinder engine, which produces 62kW of power with a 122Nm push. Thankfully, it’s a sub-tonne car, but there’s very little to be inspired by from the little Picanto’s powertrain; quite a bit of noise, but little action.

If you’re after more kick from your Kia, there’s the slightly warmed-up GT variant, with 74kW and 171Nm. 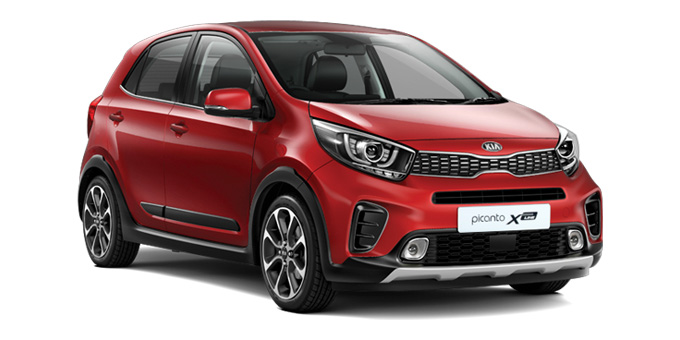 The Picanto’s four-speed automatic transmission matches its powertrain in terms of its ability to be extremely underwhelming. It feels a little antiquated and dim-witted in some situations, and prefers to stay in gear as you cruise, rather than change up, largely due to the lack of power. This can become a bit frustrating when you’d like to go easy on the engine, and try to save some fuel. 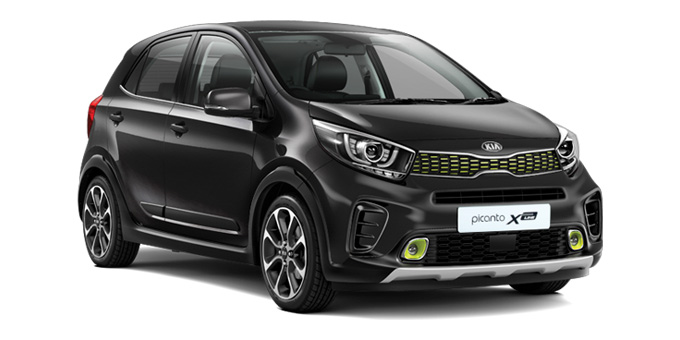 The steering is nice and light, and performs exactly how you’d expect a city runaround to behave. Years ago, Kia and Hyundai began investing in more rigorous testing in Australian conditions, and the results are paying dividends. In a nutshell, it’s a firm ride, but not uncomfortable. Those few extra millimeters they’ve added to the X-Line haven’t impeded the handling in any massive way or added any noticeable body roll. As a result, the X-Line has retained that archetypal zippiness around the city that consumers demand from an urban hatch. 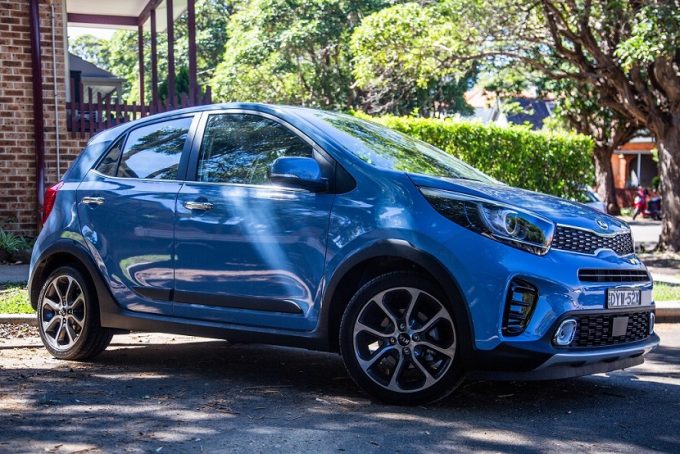 The Picanto’s chassis and suspension transfer a lot of the road surface back into the car; the suspension hasn’t been tuned to ironing out much of the road’s surface. At highway speeds, there’s a moderate amount of tyre and wind roar entering the cabin, accompanied by that little 1.2-litre unit overworking itself at 100km/h and above. 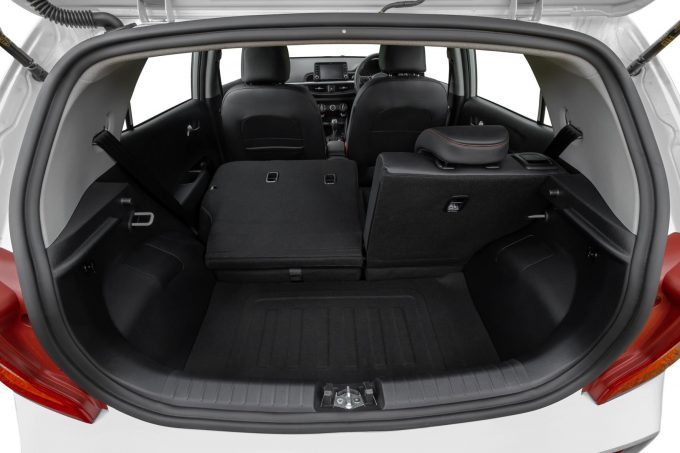 Kia claims a fuel economy figure of 5.8L/100km, which we weren’t able to match. In fact, we weren’t really able to come close to this figure. Perhaps, if you’re in absolutely no rush, and there’s no cars around you, you’ll be able to get close, but the reality is that you’ll often find yourself pushing the little 1.2-litre unit hard just to keep up with traffic. As a result, the fuel economy suffers, and the little Picanto seemingly misses out on one of the greatest virtues of a small car- great economy. That’s not to say it’s ravenously thirsty; we averaged around 7.0L/100km. Having said that, with a 35-litre tank, the age-old P-plater’s $20 quick top-up will get you more than half a tank.

Typically, this is an area that small, affordable cars don’t necessarily excel. The Picanto, however, has a few tricks up its sleeve. It’s packed with six airbags, a reversing camera, autonomous emergency braking and a forward-collision alert system; not bad considering some cars well north of $10k more than the Picanto offer some of these features as optional extras. The Picanto has an ANCAP safety rating of four-stars, where it scored a high 87 per cent for its occupant protection. 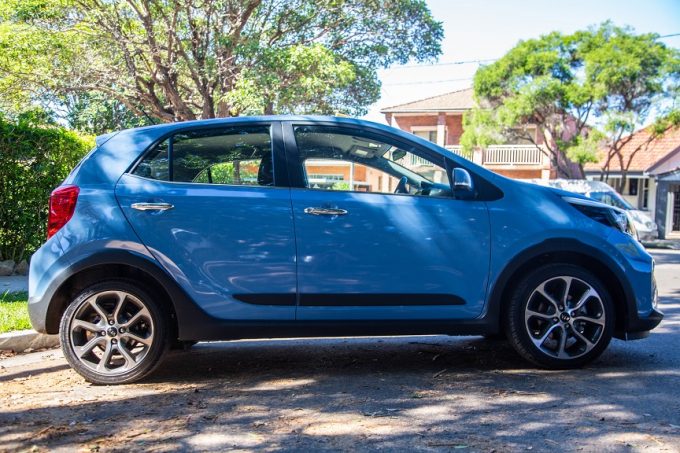 The base model Picanto is priced from $15,990 drive-away, whereas the step up into our X-Line AO Edition pushes this number up to the $17,990 mark. For that money, however, you’ll be on the receiving end of 16-inch alloys, a 15mm higher ride, some exterior design flares, alloy pedals, faux red leather trim on the driver and passenger seats, as well as a premium steering wheel. Standard equipment includes cruise control, air conditioning, AppleCarPlay and Android Auto, automatic LED headlights, folding mirrors, and as we’ve mentioned, a heap of safety equipment. All things considered, there’s a lot of kit included for your money, and we haven’t even gotten to Kia’s pièce de résistance.

The seven year, unlimited-kilometer, capped-price warranty is, for many people, the defining factor on whether or not they’ll pull the trigger on a Picanto; and who can blame them. Services come in 12-month or 15,000km intervals, and will set you back anywhere between $248 for a minor and $420 for a major service. 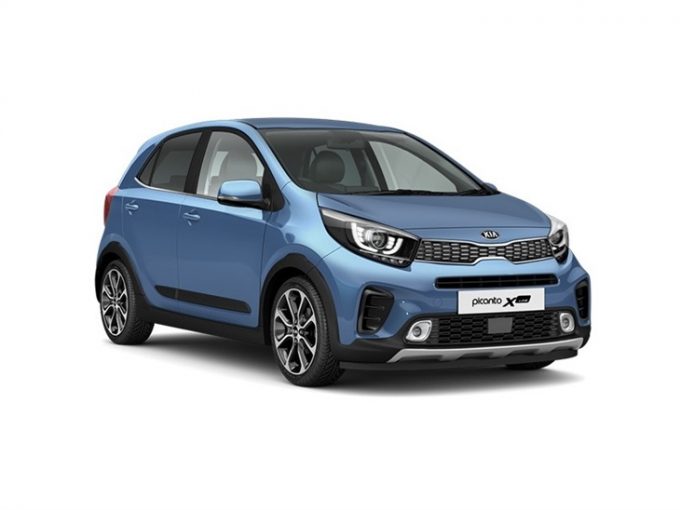 All things considered, there’s a lot of reasons to step into a Kia Picanto, but not too many reasons for us to convince you that the X-Line AO edition is the one for you. Mitchell covered the GT variant of the Picanto a few weeks back and found that it brought enough individuality to the table to warrant its own variant. With the X-Line AO edition, we’re not too sure… We’re not entirely convinced that slight tweaks to the ride height and some extra kit are enough to justify it, however, the X-Line remains an extremely sound offering. It’s another rock-solid car from a company that has come leaps and bounds in recent decades, and is dominating its respective market segment for good reason.