Hyundai’s iMax and iLoad twins have proven immensely popular in Australia ever since their inception, thanks to their colossal internal volumes, gutsy turbo-diesel engine and user-friendly interiors. Recently the pair were treated to a comprehensive facelift, which included a new front fascia aimed at bringing it more into line with Hyundai’s corporate look.

The commercial and people moving van segments are very competitive Australia, but Hyundai routinely finds themselves at the pointy end in terms of sales. We tested the 2019 Hyundai iMax Elite – which starts at $48,490 before on-road costs- to determine if the updates freshen up a compelling value package. Seeing as the car is a favourite of airport shuttle companies, we tested it for this very purpose when picking up some international family members.

Right off the bat, we enter a category in which the iMax is devastatingly brilliant. With overall dimensions of 5150mm long, 1920mm wide, 1925mm high and a wheelbase of 3200mm, this is to be expected. The eight-seater iMax has a versatile three-row seating arrangement – all comfy leather in our car- that can accommodate adults of various heights throughout. A staggering 842 litres of usable volume behind the third row is commendable and was utilised to its fullest. Also of note for parents, the second row has child restraint anchorages.

Sliding mechanisms in the second row, climate control and dual sunroofs give the car somewhat of an executive shuttle experience. In fact, from a passenger perspective, only the newly released Lexus LM could deliver a more opulent MPV experience- for well over $100k. The driver’s seat also has a handy armrest, as well as seat heating and ventilation, although the front passenger seat has heating only. The reach and height adjustable steering wheel and newly refreshed instrument cluster are welcome additions.

Our favourite feature of the iMax Elite was the twin sunroofs, which lets a nice amount of natural light, night sky or fresh air into the cabin and adds to an already airy ambience.

Before the most recent cosmetic changes, Hyundai treated the iMax and iLoad to a new infotainment system in 2016. It received a then state-of-the-art 7-inch display with Apple CarPlay and Android Auto. While it works well overall, some aspects are perhaps not as up to date as other models in Hyundai’s range, such as the fixed guidelines on the reversing camera, and the need to have your phone unlocked when using Waze or Google Maps. An integrated satnav system would be more befitting of a flagship model, in our view.

The six-speaker audio system isn’t going to win any sound-offs, but the voluminous cabin of the van creates and echo-chamber effect which enhances audio quality.

As far as ergonomics are concerned, the high seating position does take some acclimatisation, but you quickly learn to appreciate the commanding view of traffic. Steering, gearshift and HVAC controls are all at arm’s length and can be operated with minimal distraction. If we had one quibble, a rotary dial would be quicker to operate for the temperature control than the buttons offered.

The overall design of this car has been around since 2007, with this facelift being the most comprehensive update since then. These vans have become a very common sight on Australian roads, which is testament to their popularity. The new front end certainly sharpens up the look and adds showroom appeal, while the 17-inch alloys and two-tone effect give our test car some upmarket touches.

Inside, the layout is admittedly starting to show its age. The infotainment system is the saving grace of an otherwise familiar cabin. Curiously, overseas upmarket versions of this car ( called the Grand Starex) received a redesigned interior (pictured below), with a larger, tablet-style touch screen and a modern design fitting with Hyundai’s latest products. We can only assume cost was a factor here and maybe expect to see it here at some stage in the future. 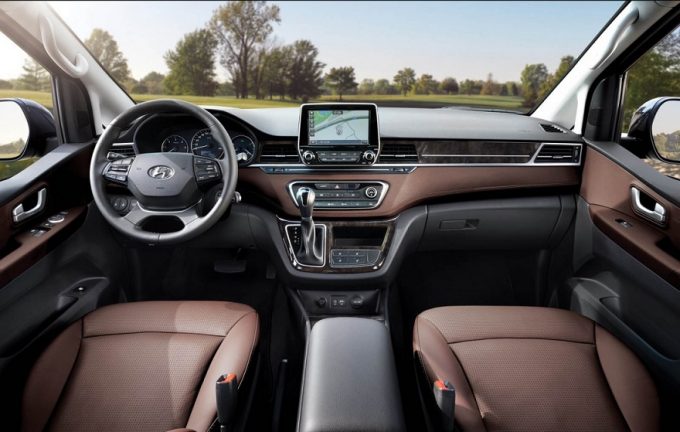 Interestingly, the iMax’s chief rival- the Chinese-built LDV G10 has a flagship Executive version for almost $10,000 less. This car does have a more modern interior layout and whopping 10-inch touch screen, but the flipside is that you are stuck with a dismal three star ANCAP rating and a thirsty petrol engine for the LDV.

Do you think Hyundai’s new vans are visually competitive against the incoming Toyota HiAce? Tell us your opinion in the comments below.

Hyundai’s 2.5-litre turbo-diesel four-cylinder engine has won universal acclaim for its prodigious torque reserves, instant throttle response and fuel efficiency. Its output of 125kW at 3600rpm and 441Nm between 2000 and 2250rpm is more than enough to make short work of the car’s 2230kg mass, while returning a respectable 8.8L/100km average. It’ll even tow up to a braked 1500kg.

In terms of refinement, it definitely emanates a workman-like clatter at idle but thankfully this isn’t present at cruising speed.

While its tradie brother the iLoad is available with a six-speed manual, the sole transmission on offer for the people-carrier is a five-speed automatic. On paper, five ratios might seem a bit old-school, but it works well enough in the daily grind, without suffering indecisive shifts and the torquey nature of the engine obviates the need for too many gears.

With the wholesale switch to electric power steering systems, the iMax’s retention of a hydraulic system got us all misty-eyed and nostalgic. Many motoring reviewers prefer the “organic” feel and feedback of a hydraulic system, so it was nice to get re-acquainted with one here — even if it was in a large people mover.

With that said, it’s not a Lotus in terms of feedback and does have some lumpiness to it off-centre. However- most importantly for the supermarket parking lot, it is light and accurate enough to inspire confident maneuverability through tighter-than-expected spaces.

When it comes to handling, there is no denying this is a car of commercial vehicle origins, but one that differs from the iLoad in an important way- by featuring a coil-sprung rear-suspension rather than the heavier-duty leaf spring arrangement.

The iMax is not as polished or nimble as some of its car-like competitors (Kia Carnival springs to mind) but it feels adequately secure over bumpy roads, at high speeds and has an electronic safety net to keep things in shape during emergency maneuvers. Four wheel disc brakes with ABS and EBD pull the big girl up well for hard stops.

All told, it is a people mover that is not intimidating to drive and you can be quite comfortable doing so.

Although the iMax is not Rolls-Royce in terms of plushness, it handles most bumps with minimal cabin interference, meaning most occupants can even sleep uninterrupted if they so choose.

As mentioned in the Engine and Performance category, the engine is a little noisy at idle, but settles into a purr once on the move, only betraying its commercial origins when faced with an uphill challenge, fully laden. There was a slight amount of tyre roar throughout the cabin but all things considered, it performed better than expected in this department.

Quoted at 8.8L/100km, this is a respectable figure for a vehicle that has to ferry around eight occupants. Real-world usage differed very little from the official figure, meaning we didn’t see the bottom of the 75-litre fuel tank during our week with the car, despite plenty of driving in varied conditions.

The iMax features a respectable, if not outstanding 4 star ANCAP safety score, thanks to front and side airbags, plus a structure which held up well to crash testing. You can read a full report of the iMax’s safety credentials here. It certainly fares better than its Chinese rival from LDV, as stated above.

While active safety systems are present and account for, we would prefer a lower intervention threshold from the stability control in the wet, as the responsive diesel engine can overwhelm the rear tyres for a split second. Careful throttle input can prevent this from occurring, but this is not particularly worrisome in our view.

The 2019 Hyundai iMax comes in two flavours- the $43,990 iMax Active and the $48,490 iMax Elite (before on-road costs, metallic paint $695 extra). That’s a whole lot of metal for the money and if we are just talking about the amount of space on offer, then yes both vehicles here represent oustanding value for money.

When you add in Hyundai’s five year/ unlimited kilometre warranty, roadside assistance package, reasonable servicing costs and the amount of goodies you get for the price and you have a very compelling value proposition indeed.

That this car can trace its origins back to the 2007 original is obvious in some ways, such as cabin presentation, refinement and on-the-limit behaviour but it remains just as fit for purpose as ever and shows how right Hyundai got the fundamentals with this vehicle. That it makes a fine airport shuttle is a given, but it is well-rounded enough for family hauler duties too.

You certainly won’t hear any complains from second and third row, however — the aforementioned overseas visitors were absolutely delighted with the iMax and plan to hire one for their next visit Down Under.