The last Toyota Camry to be made in Australia was made on October 3, 2017, right? Wrong. As it turns out, that is not the case. Well, sort of. 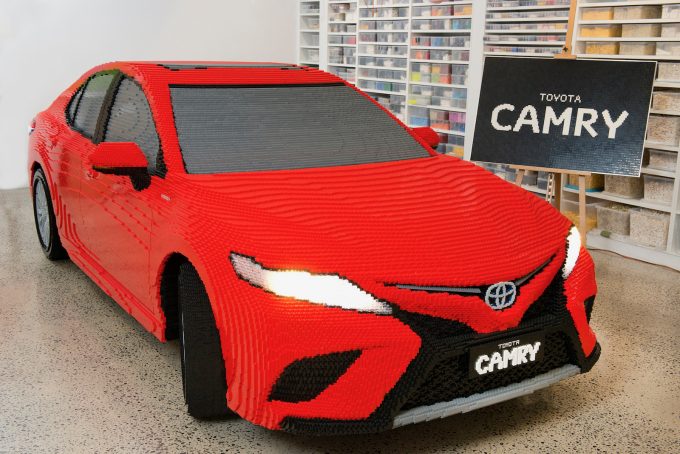 As part of the LEGO Brickman exhibition, Toyota’s Australian design team, led by Nick Hogios assembled a life-size scale verison of the all-new Camry, which took eight weeks and 500,000 LEGO bricks. Finished in red, the Camry Hybrid replica features working headlights, indicators, brake lights as well as Toyota wheel caps and ‘Hybrid’ badging. It weighs 2 tonnes, which is 400kg more than the road-going equivalent, which is assembled in Japan.

Nick Hogios had the following to say:

“We’re so excited to introduce the all-new Toyota Camry in a fun and interactive.

It’s amazing to see how quickly the car was put together in such a streamlined approach – much like our own design process locally in Australia.”

Hogios and his team have also had a hand in other projects lately, including the HiLux Tonka concept and upcoming Rugged, Rugged X and Rogue versions of the HiLux dual-cab ute. You can read our new Camry review here, which was to be assembled in Australia, but cancelled after Holden’s exit forced many of the requisite suppliers to close.

The exhibition takes place at Melbourne Museum Plaza, from March 21 to April 29. With plenty of other car-based LEGO exhibitions too. 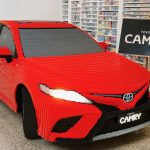 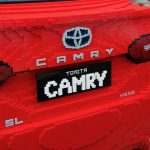 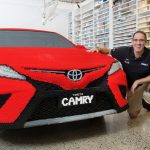