The Tesla electric semi-truck has been captured uncovered, out in the open at a testing ground in California, ahead of its expected October 26 unveiling. 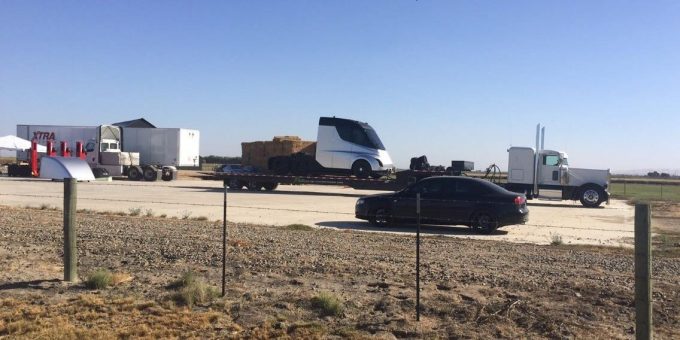 Elon Musk has previously shown a shadowed teaser of the truck, highlighting its LED headlamps, sleek silhouette and shape, but little else. There is no guarantee that this is the real deal, but this picture was apparently taken at a known testing ground for Tesla, where the Model S P85D was previously spied.

First shown on Reddit, the picture shows a rather space-age looking vehicle, with design language that appears consistent with Tesla’s passenger vehicle range. The silver body is contrasted with a black roof, wrap-around windscreen and what could be sliding doors behind heavily sculpted wheel arches. A separate wind deflector sits in the background, which would be mounted for aerodynamic purposes.

The driving range of Tesla’s first electric truck is purportedly in the vicinity of 321-482 km on a single charge, according to Teslarati. The launch of this truck will be followed by a pick-up utility to challenge the Ford F-150, the Model Y crossover and a second-gen Roadster that is shaping up to be the brand’s fastest model yet.

Ever since Elon Musk made the announcement last year, many rivals have surfaced and want a slice of the action. These include Mercedes-Benz with the Urban eTruck concept based on the Actros with 200km of range and a 200kWh battery pack, and the Fuso eCanter, the first on the market, albeit for lighter duties and with a range of 100km.

Nikola also aims to have a turbine range-extender electric truck on sale soon with over 2000km of range. It would appear that the freight and trucking space is going to get very interesting very quickly. Are you excited about the future of electric trucks? Tell us in the comments section below.